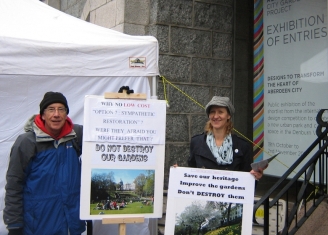 The final design for the City Garden Project was picked this week.  The proposed plan is to replace Union Terrace Gardens with a futuristic design of curving walkways and grass called the “Granite Web”.
The announcement stoked up even more controversy as it appears that the design was not the first choice amongst those that voted in the exhibition in October last year.

Favoured was the “Winter Garden”, the design with the big greenhouse resembling a giant glass worm.

A letter in the Scotsman gave a typical response to this ‘consultation’:

“Pointless poll. Of the six designs submitted for the development of Aberdeen’s Union Terrace Gardens, one emerged as the clear favourite during a protracted public consultation in which the Aberdeen electorate took part.

Yet a panel of judges has selected one of the other designs, and the Aberdeen public is apparently to be given the choice between this one or nothing. What is the point of holding a public consultation and treating the result as if it didn’t exist?

It is not the first time that a consultation on the fate of Union Terrace Gardens has been ignored. A public consultation run in 2010 saw a majority of the public rejecting the scheme.

The design itself is also controversial. John Glenday, the editor of the magazine for Scottish architects the Urban Realm, commented:

“Diller Scofidio & Renfro’s ‘granite web’ of interconnected walkways has been sold as a vision of the future for Aberdeen. However the seductive sixties sci-fi vision presented may be out of date before the journey from concept to reality has even begun. In their submission the architects have spun a tale of making Aberdeen “throb” again but the history of elevated walkways and underpasses, as anyone who has ever traversed any concrete New Town will attest, is often dystopian.

“Health and Safety officials are also likely to have a field day with the walkways and platforms as presented, inevitably leading to a compromised design with fencing, signage and other clutter once the demands of building regulations are met.”
http://www.scotsman.com/news/cartoon/analysisagrandschemebutitmayjustbealittletoolate

Others have been more  sceptical. It has been variously likened to a Teletubbies TV set, a skatepark and even  ‘Mounthooly Roundabout on steroids’. The City Garden Project have however reached for their dictionaries to praise the ‘vision’, with press releases abounding with words such as ‘transformative’, ‘vibrant’ and ‘dazzling’. Despite the hype there are very few facts being presented. We still do not know how much it will cost or how long it will take to build.

In another development, Aberdeen City Council are to hold a special council meeting next Wednesday to discuss the City Garden Project.
http://committees.aberdeencity.gov.uk/mgConvert2PDF.aspx?ID=18252

The report for the meeting asks councillors to approve the final City Garden Project design , expects the private sector to commit at least £70 million towards the project and discusses some of the land ownership issues.

There is no discussion in the report as to what happens if the City Garden Project goes into massive cost over-run. In 2009 the then Chief Executive, Sue Bruce,  decreed the private sector would be responsible for any cost over-run. Since then, no procedure has been discussed on ensuring agreement about this. In my opinion, Aberdeen City council are being grossly negligent here.

Councillors are effectively being asked to approve the final City Garden Project design ahead of February’s public referendum.

Yet the report mentions that:

“ACGT has produced initial draft proposals in respect of the likely uses of any internal and external space to be created by the proposed development and are currently redrafting these proposals to reflect the space provision within the design recently selected by the Design Competition Jury.”

It is difficult to see how councillors can approve a project when there is no clear statement as to what the scheme is going to be used for.

The requests to councillors to spend up to £300,000 on legal costs from Council funds will be very controversial. We have been repeatedly told that the City Garden Project will have no impact on Council budgets, yet this is clearly not the case here. Some will ask how such costs can be justified when services and amenities are being drastically cut elsewhere.

Polling cards for the referendum are to be issued to Aberdeen residents on or around the 16th February. We will be asked for a third time – what do we want our city centre to look like?

The public are being treated with disrespect on this issue. Nevertheless, Aberdonians should ensure that they vote in the referendum.  This one counts.