Is control over the future of the City Centre and its Victorian Union Terrace Gardens falling into the hands of unaccountable, unelected agents?  Mike Shepherd believes it is, and sends his thoughts to our Councillors.

Council documents make it clear that you were expected to sign off the design brief for the City Garden Project at the full council meeting on June 29th.  The design brief is intended not only to give specifications for the civic square covering the Denburn, but also to provide details for the usage of the large underground space beneath the square. 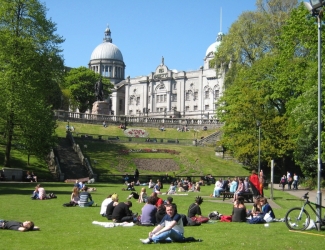 There is a problem however; the full specifications for the design brief did not appear to be ready in time for the 29th of June.

There is also intent to provide conference, exhibition and meeting space of unspecified size. The open space is described as a contemporary 21stcentury garden.

Given that these plans are designated for council-owned land, that the area is zoned as public green space in the local plan and the council have been asked to borrow £70million through a TIF scheme to fund it, then it would be reasonable to expect councillors to approve the specifications for the site.

You have now lost control over the City Garden Project. A non-elected body has now made decisions as to what our city centre should look like.

It now turns out that this will not be the case. You are not being asked to approve the design brief.  I have been informed by a council officer that:

“it was decided, by members involved in determining the agenda for Council meetings, that there was no need to obtain Council approval for this.”

The intention is to hand out the design brief to short-listed companies for the architectural competition on the 21st of July. The next full council meeting is not until the 17th August.

You have now lost control over the City Garden Project. A non-elected body has now made decisions as to what our city centre should look like. They have decreed that the Denburn should have a “contemporary 21st century garden”, not you. It is this body that is also deciding what the large underground concourse should be used for. If conference and exhibition facilities are to be  provided, then this will clearly have implications for the future of the Aberdeen Exhibition and Conference Centre at the Bridge of Don.  However, this is not a decision that you will have any control over unless you turn down the city square plans.

The public should be extremely worried about the loss of democratic control over the City’s assets. The public were ignored when they voted against the City Square in a public consultation last year, now the powers given to our councillors are being bypassed too.

I would ask you to assert your right to decide on our behalf what happens in our city. I would request that you insist that the approval or otherwise of the City Square design brief should be a matter for the council meeting on the 17thof August.