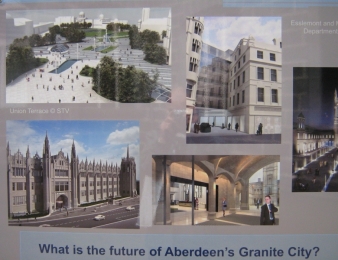 The ACSEF newsletter for December has announced the new project management board for the City Square Project. The board will be chaired by Council leader John Stewart and there are no surprises in its make-up. A further two members, representing young people and heritage and horticultural issues are being sought.

The board to date comprises:

The presence on the board of SNP leader in the council, Kevin Stewart, is of interest. Kevin will be standing as the SNP candidate for the Central Aberdeen seat in the May Scottish parliamentary elections. The seat is currently held by Labour MSP Lewis MacDonald with a majority of only 382 and is described on the SNP website as one of the party’s top target seats. Kevin will no doubt hope to avoid the City Square becoming an issue in the May election although it is difficult to see how he can avoid this as the full council meets on April 27th – just eight days before the election on May 5th.

The City Square dominates the Council meeting and the agenda is highly controversial including a vote on approving the transfer of the lease of Union Terrace Gardens to the limited company or trust that will take over running the project next year.

The newsletter also gives details of the milestones for the project. These are: Launch of international design competition Spring 2011; Short-listed designs out to public consultation Autumn 2011; Final design selected Spring 2012.

The project is running very late. According to the original timetable issued at the end of June 2010, the design competition was due to be launched on the 1st November last year with the final design to have been selected by the 17th June 2011. One of the big problems with the timetable is that the project will now extend beyond the Council elections in May next year and it is distinctly possible that any new administration could kill of the project as a priority.

Elsewhere in the newsletter, you can read about the so-called benefits of building the new City Square. Some of them are much less than convincing:

“There will be something for everyone.

Green Space : a calm, garden oasis in the heart of the city where you can enjoy the changing seasons

History & Heritage : outdoor and indoor areas for displaying and showcasing our history and heritage. An opportunity to see, touch and feel what is currently hidden away.”

ACSEF are also seeking “some high profile/celebrity endorsers to ‘champion’ the content development for key themes of the project: green space and gardens; leisure and recreation; science and energy; arts and culture; and history and heritage.” 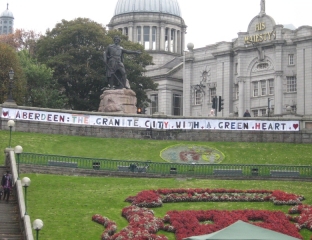 The ACSEF newsletter makes for curious reading. It would be have been thought that the new project board would have been worthy of a press release, but this has not happened to date. It gives the impression of being bullish about the city square but only to the limited circulation of the newsletter amongst business people, politicians and opinion formers.

ACSEF are only too well aware of how controversial the city square is in Aberdeen.

There is a sense here of an organisation running scared from public opinion, at least until the new public relations company for the project starts work in the early part of the year.

The Council would have you believe that the City Square is a done deal; it is anything but. The whole set-up is starting to look shaky; everything is running late; the massive amount of money needed for the square is an obvious problem; many Aberdonians are still very angry about the ignored consultation and the ramifications of this will be put to a true democratic test in two elections this May and next.