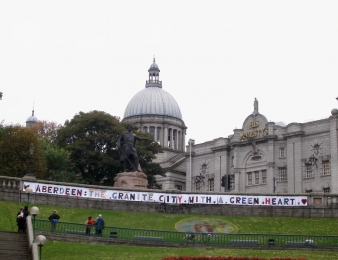 When the City Square Project was originally considered by Aberdeen City Full Council on 19th May 2010 little was known about Tax Incremental Financing (TIF) and indeed, at that time,  it was not even a legal mechanism for funding regenerative projects. The origins of TIF are in the United States where it has been a mechanism for funding regenerative project for the past 50 years or so.

Indeed so widespread is its use that the the term ‘regeneration’ is virtually interchangeable with that of TIF.

Its widespread use in the States has led to somewhat strange situations with regeneration centring on a single shed in a field in order for one state to lure WalMart in at the expense of another! This is one of the flaws associated with TIF; potentially all it does is move business from one area in need of regeneration to another as incentives, by way of paid for infrastructure, lure commercial companies across State boundaries.

So is it suitable for the funding proposition that is the ‘regeneration’ of Aberdeen City centre? Well the first question is; does the city centre require regeneration? Sir Ian Wood obviously believes that it does and has proposed to gift the City some £50 million to support the claim. He describes the city centre as ‘second-rate’. The regeneration proposed is very specific – it must be a city square (well actually now a city garden since the public rejected the square concept in the deeply flawed consultation process earlier this year that was driven by ACSEF) with walk on access from all four sides. This will require the engineering of a raised platform thus obliterating the Denburn Valley and destroy the existing city garden in the process. But then you know all this. The key is that the City Square is essentially a civic project and, this is important, will not generate in its own right enough commercial ‘revenue’ to repay any TIF loan (because that is what TIF is – a loan that has to be repaid ) required to fund the infrastructure build.

So how will the TIF borrowing be re-paid? Well the original proposition was that a variety of sites dotted around the city would suddenly become attractive to developers, as a result of the City Square, and the business rates so generated would be used, in part, to repay the TIF. The other element that would contribute would come from the increased business rates generated in areas adjacent to the City Square. Now business rates can only go up because  any given business is more profitable as a result of the regenerative project.  All sounds good. Apart from its not good at all.

even with the Edinburgh proposals there are risks, more so with a stagnant economy because TIF relies heavily on business taking up the cudgels to build

Firstly the proposal that you can use business rates from properties that have no connection whatsoever with the City Square (for example the Oakbank school site, an original candidate for TIF loan repayment) is nonsense. This author has had conversations with TIF experts at the British Property Federation (whose job, amongst other things, is to promote the use of TIF where appropriate) who indicate quite clearly that you cannot repay TIF in this way.

Interestingly someone at the City Council must have picked up on this too because in the report to the City Council Finance Committee of September 28th it seems to have disappeared as a TIF repayment proposal.

This leaves the mechanism of the increased rates from adjacent businesses. Such TIF repayment is known as loose-coupling.  In TIF terms loose-coupling is highly risky. This is because the linkage between TIF funded project and the surrounding rates increases is far from guaranteed. It is worth stressing this as all other TIF proposals in Scotland  are closely-coupled. Close coupling is far less risky because the TIF funded infrastructure is directly linked to the development with which it is associated. Here’s an example. In Edinburgh infrastructure (roads, a pier, a marina, etc) are to be built in order to attract in developers to the brown field Leith waterfront to build (note that additional build is happening) some 2,800 homes and 900,000 commercial square footage of new properties that result specifically because of the TIF funded infrastructure.

Hopefully the difference between loose-coupling and close-coupling is clear and  the greater viability of what is proposed in Edinburgh self evident. There is (unless you hate development of any kind) nothing wrong with TIF when it is correctly and sensibly applied. Even so everything is not clear cut. John Handley, a regeneration expert, writing in the Scotsman newspaper earlier this year quite clearly indicates that even with the Edinburgh proposals there are risks, more so with a stagnant economy because TIF relies heavily on business taking up the cudgels to build; more uncertain at a time when money is scarce and the need for new office space dubious.

Loose coupling has its place too, where there is blight in an area (i.e. the area is so undesirable and decrepit people have moved out and so have businesses and no one will touch development in its present state as it is completely non-viable), then TIF infrastructure can act to pump-prime an area so that business and residents return and start paying rates and council tax that then repays the loan – but there are still risks. For Aberdeen it makes no sense as no one would describe the centre of Aberdeen as ‘blighted’. There are some empty shop spaces but this is largely normal ‘churn’ and to some extent might actually indicate the over-representation of retail space in the city –  is there more capacity than there are shops to fill the available space?

At the Finance committee of 28 September 2010 a paper was presented that sought to indicate that TIF could still be applied to a variety of projects within the city irrespective of whether the City Square project were to proceed.

There was some debate regarding the proposals as well there should have been as there are some fundamental flaws in what is being proposed. One potential scheme was for construction of infrastructure by way of a “high quality pedestrian route” with absolutely no indication of how the construction costs of this facility might be repaid; does building a pavement lead to increased business activity in an already prosperous city?

Worryingly for the citizens of Aberdeen, the Council, at a time when swinging budget cuts are to the fore, are seeking to borrow some £200m using TIF. The belief being that they can do so at zero risk to the Council. One presumes that they will seek a commercial sector 3rd party to under-write the borrowing, perhaps by way of a Special Purpose Vehicle, to which assets,including Union Terrace Gardens will be transferred. One cannot help but feel that the proposals are speculative at best and at worst could leave half completed construction projects scattered across Aberdeen – that’ll help the City’s image no end.

The frailty of the TIF business case for the Aberdeen City projects has recently been alluded to in an article in Holyrood Magazine. In the article, The TIF Factor in the 15 October issue, the City Council’s Project Director for Economic and Business Development indicates the risks associated with what is being proposed; the basis of which is that because of the City Square/Garden project, people will suddenly be more inclined to linger in the city centre and spend more (even more!) money. Such a model is dubious at the best of times but with a recession under-way and massive cuts still to come to the pubic sector, this could well be completely the wrong time to attempt such a tenuous approach. 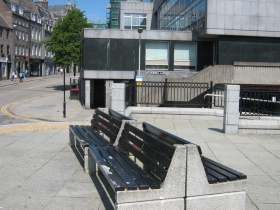 As the Council scuttles around trying to jump onto the TIF bandwagon, bemused citizens are left to look on wondering just what could be achieved with Sir Ian Wood’s generous offer that would genuinely help the city without huge debts being incurred. Union Terrace Gardens could be improved and better access facilitated. St Nicholas House could be demolished and a new city square enabled by the closure of Broad Street; the Wallace Tower could be returned from the oblivion of Seaton Park and the upper deck of the St Nicholas Centre (a precursor of the City Square?) re-invigorated with connection to the new St Nicholas civic space.

This ‘second- rate ‘ blight if cleaned up and  removed could give Aberdeen a city centre a face-lift without re-course to the potentially financially crippling projects that the TIF proposals seek to enable. It would also mean that the much loved Union Terrace Gardens need not be lost by insensitive development thus placating the majority who voted in favour of their retention all those months ago.

No Responses to “Tax Incremental Funding And The City Square”