Thanks to Mike Shepherd. Introduction by Dave Guthrie. 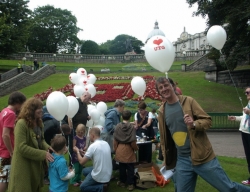 Few local issues have caused as much controversy as the role of Union Terrace Gardens in Aberdeen’s city centre. Everyone has an opinion.

As far back as 1952 there were plans to extend the gardens by covering over the railway line and Denburn Road.

There was the short-lived Millennium Square project and then, in November 2008, Sir Ian Wood offered £50m to help transform the Gardens and revitalise the city centre. Two schemes were proposed, one from Peacock Arts which failed to secure sufficient funding in time, and one from ACSEF – the City Square Project – which involved raising the entire area up to street level. After public consultation 55% of those who responded rejected this plan.

The scheme was re-branded The City Gardens Project and at present the city council has invited tenders from companies to handle a public relations contract and a planning and design competition. They have also created a project management board which should comprise members of the council and representatives from Scottish Enterprise, ASCEF, the Wood Family Trust, the Chamber of Commerce, the City Centre Association, Aberdeen Youth Council, the Aberdeen community and local property owners.

The Friends of Union Terrace Gardens – perhaps the most organised and active group although they have as yet no representative on the PMB – who represent several thousand people, asked the main Scottish political party leaders to write a few paragraphs saying what they thought of the project. Here is what they had to say:

“Union Terrace Gardens could and should be an attractive resource for all people in Aberdeen, local and visitor alike. 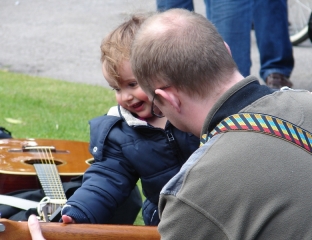 Sadly, however, this space has increasingly been used by undesirable visitors including those abusing drugs and alcohol. Many people who would enjoy the gardens in a responsible manner are deterred from entering the site. Indeed, I am informed that a number of schools actually ban their pupils from going there for safety and security reasons.

Something needs to be done to return this underused and potentially attractive sunken garden to all people of Aberdeen.

Of course, any development would need to have widespread support and be a real improvement to the site. Under current proposals, I understand that some public money would be needed to supplement the £50 million pounds that has been offered. While the Scottish Conservatives support in principle bringing ideas forward to improve Union Terrace Gardens, we must ensure that no money is removed from existing public services in order to do so.”

“It is for the people of Aberdeen to decide what is done at Union Terrace Gardens. There is no evidence of public support for bringing the Gardens up to street level. A project of that scale should not go ahead without the support of the citizens of Aberdeen, and without such support it should not receive any further Scottish Government funding.

That said, what happens in Aberdeen matters to Scotland, and I would like to see action taken to make Union Terrace Gardens more accessible and user-friendly once again. Families need some basic facilities if they are to make full use of a public park, and the disabled access to the gardens needs to be better signposted and easier to use.

City councillors hold Union Terrace Gardens in stewardship for the people. They are not just another plot of land; they are a unique asset and Aberdeen’s only city centre park. I hope the City Council will pay heed to the citizens of Aberdeen, and promote the kind of investment in Union Terrace Gardens local people want to see.”

“The Greens both locally and nationally fully support the campaign to retain the historic Union Terrace Gardens in their current form.  The people of Aberdeen were consulted and rejected the proposal: it is shameful for the City Council and business to try to overturn that outcome.”

“I am well aware of the strength of feeling in the Aberdeen area about what should happen with this proposed development. The current plans have engaged opinion on both sides of the debate.

It is for Aberdeen City Council and most importantly the people of Aberdeen to decide how they wish to see the City Centre developed and I welcomed the public consultation on the City Square project.  It is absolutely right that the people of the North-East had the opportunity to have their say on the plans.

Aberdeen City councilors voted in favor of the proposals to build a new City Square and I understand a design competition is underway, which will seek the views of local citizens, as to what the development will look like.

It strikes me that in these tough economic times there is all the more reason to think big for the future of the North-East of Scotland. We should be excited by the scale of this vision and the commitment to ensure great things can be made to happen.”

“I want to see Aberdeen prosper and its civic spaces are an important part of the City’s attraction to local people and visitors alike. Proposals to change and invest in a part of Aberdeen need to be determined in the City. I do not think it is right for national politicians to tell local people how to conduct their judgement about what is right for their city. I would certainly not thank another party leader for giving the people of Shetland a lecture on what is best for Lerwick! So the point I would make is that MSP’s and party leaders have a responsibility to ensure that the local Council and the planners properly do their job in assessing the proposals and are accountable to local people for their decisions. Self evidently I trust that whatever is finally agreed commands support of the people of the City.”