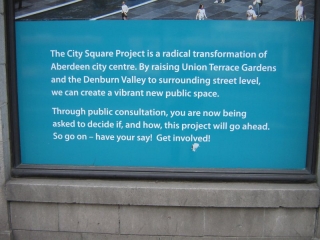 On Monday, the campaign group Friends of Union Terrace Gardens used the visit of the Scottish Minister for Enterprise, Jim Mather, as the basis for mounting a demonstration against the activities of Scottish Enterprise and ACSEF (Aberdeen City and Shire Economic Forum).

Jim Mather technically oversees Scottish Enterprise, the organisation responsible for funding over £300,000 of public money for the consultation on the City Square Project last year. ACSEF were the body promoting the City Square project, the plan to develop Union Terrace Gardens.

There is still much bad feeling in Aberdeen over the results of the consultation. You can still walk down Union Street and see a poster display in a shop window proclaiming “Through public consultation you are now being asked if, and how, this project will go ahead”.

The consultation document itself could hardly be described as even handed as there was a clear prompt at the top in case you were unsure how to vote: “Have your say. We believe that Aberdeen needs a large vibrant, cultural and civic space and gardens in the heart of the city for today and for future generations”.

You could vote online, but many fell foul of a computer glitch. The default option for the question “Do you support the City Square project?” was yes, and even if you thought you had toggled no, there is clear evidence that in some instances a yes vote was still registered.

Yet, despite all the inbuilt bias, intentional or otherwise, 55% voted no, with 44% voting yes and 1% having spoiled their ballots. The percentage voting no should have been larger given the computer glitch, but even so, a clear majority of 1,270 said no out of the 11,943 persons taking part.

What happened next is the main reason why we were demonstrating on Monday. ACSEF chose to ignore the result and proceed with pushing the City Square project anyway. Sir Ian Wood, who had kicked off the project by offering to provide up to £50 Million to fund it, then said that Aberdeen Council should make the decision as to what should happen next with the project (they voted to proceed with it).

The consultation has had the unfortunate effect of disconnecting the Aberdeen public, the council and big business

ACSEF tried very hard to frame the results in terms that they were somehow inconsequential. The vote was said to be “narrow” or “evenly divided” despite the 1,270 majority. I’ve even heard the vote described as effectively 50:50 (it wasn’t, a decisive 55% said no). Another favourite device was to say that the vote was statistically invalid, although one suspects this is on the basis that it produced the wrong result for the organisers. Another argument used against accepting the no vote is that the only a small percentage of the Aberdeen public voted and that the size of the sample invalidates the result. Yet the organisers of the poll themselves said, “This is a huge response rate when compared to similar style consultations. For example, the Edinburgh Tram consultation had just under 3,500 direct responses” (http://cdn.activecommerce.net/content/csp/Summary_Leaflet_FINAL.pdf).

The Aberdeen public believe they have been very badly treated. Despite having voted out an unpopular scheme to develop Union Terrace Gardens, they have been ignored on some rather flimsy pretexts. The consultation has had the unfortunate effect of disconnecting the Aberdeen public, the council and big business, with each party mistrusting the others. Local democracy is currently pretty weak in Aberdeen. In particular, there is a feeling that the business community is being allowed to pursue its agenda without regard for the wishes of the public.

If you want to you to join Friends of Union Terrace Gardens, see our website: http://friendsofutg.org/