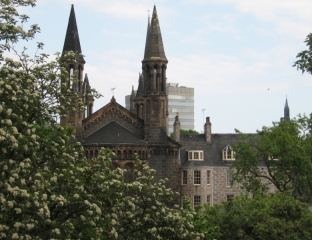 The plan was to build a multi-storey car park in place of Union Terrace Gardens with a concrete civic square on the roof. The local papers carried a drawing of the proposed scheme with happy smiling people wandering aimlessly around a concrete wasteland dotted with a few pot plants.

This view could have come from the feasibility study for the current City Square project, but it did not. This is what had been proposed for the gardens circa 1984 by the commercial company National Car Parks Ltd (NCP). If my memory serves me correctly the council may also have been involved as a joint venture partner.

Back then I worked in an office in Dyce and on the bus to work I read an article on the scheme in the Press and Journal. My initial thoughts were that this was not a serious proposition, the council could not possibly allow a much loved city centre park to be replaced by a multi-storey car park. Soon after, I talked to two of my local councillors and asked them about the plans. To my astonishment not only did they take the proposal seriously, but one of them had a rant at me. As far as he was concerned the sooner Aberdeen was turned into a modern city the better.

This was an alarming situation as it looked as if Aberdeen was about to lose the gardens and there was nothing anyone could do about it. I was overwhelmed by a feeling of powerlessness in the face of greater forces at work. What could I do?

I then decided to act. I formed a small campaign group and organised a petition with 2000 signatures. This may not sound that much by comparison to the recent “I heart UTG” petition with over 10,000 names, but this was pre-internet and getting 2000 signatures was hard work back then. We also contacted our councillors and wrote letters to the local press.

Aberdeen is ideally set up for a campaign of this sort. It is a small well-connected city where almost everybody knows somebody that knows you. The campaign went viral and the car park scheme became highly controversial throughout the city. At this point one of the councillors on the leading group running the city decided to speak up and voice his concerns about the plans. His party were then faced with splitting into two factions over the issue or throwing their lot behind the renegade councillor in order to maintain political unity. Subsequently, permission was unanimously rejected by the planning committee and the scheme was dead.

I now find myself 26 years later helping with a new campaign against a very similar scheme to build over Union Terrace Gardens. The councillors are a different bunch now but with the ruling group still out of touch. They are too close to big business in the city and it appears that they do not listen to the people.

Many think that the City Square project is unlikely to happen as it is just too expensive and too risky for the council to get involved with. It could take another two years for the council to realise this or they might even buckle under the pressure sooner than they did in 1984. The Friends of Union Terrace Gardens intend to campaign with the utmost vigour until this happens.

One lesson from 1984 is clear; Union Terrace Gardens occupies a prime site of downtown real estate with big business forever eagerly eyeing it up. The citizens of Aberdeen need to keep eternal vigilance to ensure that this space is kept the way they want it to be; a beautiful Victorian park in harmony with the granite buildings that surround it. The fight has been won before and it will be won again.

If you want to help with the campaign, join the Friends of Union Terrace Gardens on our website.