Members of Friends of UTG were shocked this week when they attended what they thought was a fairly low-profile council meeting to discuss ‘land use’ in the city. 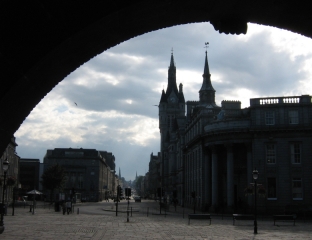 ‘A friendly councillor told us about the Land Use forum being held in Aberdeen town house on Tuesday night. We went along with the vague idea that there might be some discussions relevant to the Union Terrace Gardens campaign. To our surprise it was a meeting to discuss council cuts over the next five years.

Present were various members of the council executive representing enterprise, planning and infrastructure (but not social services).

Options for budget cuts have already been published elsewhere. Nevertheless, it was still a shock to hear about them from council officials themselves in what proved to be a very gloomy meeting.

The intention is to cut the council budget by 10% over years 1 and 2, and then by another 10% over the period years 3 to 5, totalling £127 Million.  Here are some of the things that were said at the meeting.

–         There is no legal obligation for the council to fund parks, open spaces, street lighting or public toilets.

–         There is an option to close all 9 public toilets in Aberdeen. One possibility being considered is to pay commercial properties to allow the public to use their toilets.

–         An option is that once a council cemetery becomes full, not to maintain them and turn them into a wild life area.

–         Reduce school crossing patrols, perhaps using them in the morning only and not at dinner time or the afternoon.

The council are looking for consultation on the cuts. In an angry exchange, it was mentioned that it was difficult to take the council seriously on this after the City Square debacle. The council executive assured everybody that they were serious about listening to the public.

Some suggestions were made in the discussion that followed. The council fund ACSEF by £230,000 a year, a figure confirmed at the meeting, and they could easily afford to fund themselves. It appears that there is a three-way agreement between Aberdeen council, Aberdeenshire council and Scottish Enterprise to fund ACSEF and the next review of this agreement is over a year away. Nevertheless, cutting funding to ACSEF is an option that has been considered.

Another idea was to put a moratorium on further council borrowing, particularly as a large part of the revenue budget services the debt. We were told that this wasn’t a practical idea as certain departments required unavoidable investment.

One ACSEF supporter at the meeting replied to this that the city needed better infrastructure like approach roads, only to get the caustic reply that what was the point of better access to a city where there were no parks, no public toilets and the cemeteries were wild life areas.

Although no decisions have been made re. cuts, there is no doubt that the standard of public service in Aberdeen is going to decrease substantially over the next five years. Given the irony of an almost bankrupt council in a rich oil town, JK Galbraiths dictum of private affluence and  public squalor side by side will become painfully obvious before long. ‘