The future of Union Terrace Gardens came under intense scrutiny again on Wednesday 6th when a full meeting of the council was asked to vote on a new timetable for they key steps in the project. Although the proposed agenda was described as ‘only indicative’, its adoption would mean that the council were giving the go-ahead to this extremely complex initiative.

The group Friends of Union Terrace Gardens, who are campaigning for a more considered approach towards any development of the site, were allowed to make a submission to the council before the matter was put up for debate. Chairman of the group, Mike Shepherd reports; 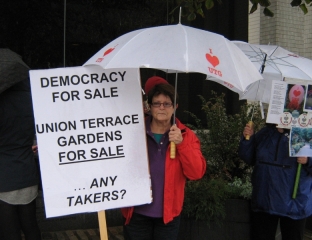 I was allowed to give a deputation, which involved giving a ten minute talk to the council. I noted that the City Garden project has already suffered some significant delays. For instance, the item to consult the public on short-listed designs for the square has been delayed by four and a half months and will now start on the 24th August 2011.

One of the results of this is that several key decisions have been placed into the council meeting next April. These include approval of the final funding business case; a statement on the ownership of the gardens; approval of the SPV’s project business plan, approval to lease council land to the SPV and permission for the SPV to take the project forward.  I urged that there is a need for caution on what is a complex financial and legal issue. I argued that to make several key decisions in one day’s council business is far too fast for the council to properly assess the situation and makes it likely that some big mistakes will be made.

The term SPV mentioned above is an acronym for Special Purpose Vehicle. An SPV is a legal entity which is a limited company or a partnership created for a specific purpose separate from the sponsoring organisation (in this case the council). The SPV could be similar to the Aberdeen City Development Company, an organisation currently being formed by the council to act as a joint venture between private enterprise and the council for the purpose of semi-privatising council assets deemed to be ‘market failures’.

A comment was made that having ignored the initial consultation where the public said no to the scheme, we would now be forced to pick the least-worst design

It has been proposed to set up the City Development Company with 12 board members of which only up to four will be from the council. The remaining board members are likely to come from private enterprise and possibly from Scottish Enterprise, a national government organisation.

The SPV would be charged with taking the city square through to completion.

This organisation is not supposed to exist until January 2012, when the council have noted a budget of £900,000 for staffing costs. However, we read in the calendar that the council are now being asked to approve granting the lease for the gardens to the SPV on April 27th 2011, at least a year before a planning submission is likely to be made. We have been told by the Council Executive that the lease would probably be assigned for 125 years. Although the council would nominally own the park, control would pass over to the SPV.

I said the following to the council during my deputation:

“If the lease is assigned early, then what happens if planning permission is not given? Does this mean that the council will have given up control of the park to a third party with no clear idea as to what happens next? How will the council get the lease back; can it get the lease back? What will be the status of UTG as a council-operated park if the lease is assigned 3 years before any construction is anticipated? Will the public be allowed to use the park after April next year?”

I didn’t get any answers to these questions. Surprisingly, the issue of a lease barely come up in the council debate that followed. However, one further controversy arose. Councillor John Stewart, the council leader and supporter of the City Garden Project, was asked if the option to keep the gardens substantially as they are would be one of those given to the public when they were being allowed to comment on the designs for the city square. No was the answer.  A comment was made that having ignored the initial consultation where the public said no to the scheme, we would now be forced to pick the least-worst design.

Councillor John Stewart wrapped up the meeting by supporting what he described as an exciting, new vision for the city centre. He urged the council to approve the calendar going forward as a way to explore a possible future for Aberdeen and to fully assess the risks for the project. The vote went in his favour 21 to 13.

The fate of Union Terrace Gardens will come up again at the full council meeting on the 27th April 2011, a date when control of the gardens could be given away early. By this time, it is likely that that city-centre park will be a major issue in the Scottish parliamentary elections which are to take place eight days later on Thursday 5th May 2011. I have a feeling that the controversy over Union Terrace Gardens will have reached boiling point by then.