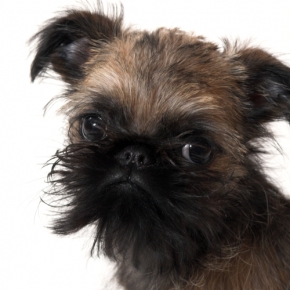 Peely-wally men – myself included – wouldn’t say boo to a Graylag goose unless through a megaphone from an adjacent county.

We compensate for our cowardice by fantasizing that we graduated from the Academy of Hard Knocks with a degree in machismo, alongside Charles Bronson and ‘Machete’ Mick Fobister (D-wing, Peterhead prison).

Nowhere does the peely-wally gene (PW-36) more readily find expression than through the language of challenge. In his efforts to make sure he will never have to carry out the threats he makes your off the shelf coordy-custard is capable of bending the English language like Uri Geller bends soup ladles.

Just how do the fearty-panted use their mither tongue to talk the talk without ever having to walk the walk?

A really good example is the classic exchange between Ronnie Sangster and Bob Stoat.  An event which overnight catapulted Ronnie into the Animal Liberation Front’s Hall of Fame alongside such greats as Cattle-Poop Perkins, the inventor of free range mince.

I can vouch for the authenticity of this story because I was there the night it happened. I was feeding the East Neuk’s one armed bandit with the last of the pound coins from my grandson’s university-fund bankie (Well, now that the fees have gone through the rafters, he’ll just have to get a job in the ASDA bakery until he can pay for his own education).

At a table near the gents Ronnie Sangster hung over his Zimmer frame like a wet duffel coat.  I would have judged him dead if it wasn’t for the snoring.

He had been having it large in the Brown Ale stakes for at least the three hours it took me to squander little Tommy’s inheritance trying to get three melons to fall in a straight line. As the wee lad’s last shekel rattled into the bandit’s coin box Bob Stoat staggered backwards into the bar dragging Murdo, an ancient three-legged whippet with a coat as manky as a soup kitchen doormat.

Now this was a threat, wasn’t it? It certainly sounded like it

It seemed to me that Stoatie’s best friend should long since have boarded the Marrowbone Express to Doggie Heaven. Judging by what happened next, Ronnie Sangster violently agreed.

Re-animated by forces beyond our ken, Ronnie clambered to his feet in installments. Eventually, blue with rage and emphysema in equal measure he stood gripping the bars of his Zimmer frame, glowering at Stoatie like a Hellfire preacher beholding a sodomite.

Once he’d squeezed enough oxygen back into his lungs to do so he spake forth:

This sounded like a threat but was in fact an assurance to the victim that not a finger would be laid upon him. Some threat. But Ronnie had not yet finished.

“But If you ivver come in here wi a dog like that again, you’re deid,'” he said.

Now this was a threat, wasn’t it? It certainly sounded like it. It had a condition – Bob’s return – and a consequence – Bob’s funeral. But closer scrutiny revealed that an unaddressed envelope bearing no postage stamp, mis-filed in the basement of an abandoned Royal Mail depot had more chance of being delivered than Ronnie’s threat.

The promised ‘chinning’ would require Bob Stoat to return to the East Neuk, not with Murdo, but with a dog like Murdo. There was more chance of Ronnie Sangster buying a round of drinks.

All that hot air. And not a single black eye to show for it.

Let us finish with a more commonplace example of how we big ourselves up whilst speaking with forked tongue. You’ll recognise this. A brass necked flatmate points out over breakfast that your oxters are yodelling and insists that you buy an industrial strength roll-on deodorant.

Later, you tell this tale to a friend, who says:

“If he’d said that to me I would have cleaved him in twain with a claymore before he got the top off his boiled egg.”

This type of hindsight-powered swagger is usually delivered from a high horse in a sneering tone, implying that the story teller is as limp wristed as an effeminate volleyball player.

There is a subtle distinction between both examples.

In Sangster/Stoat there is an itsy bitsy teeny weeny mathematical chance that Bob Stoat might rescue another three legged whippet from the cat and dog home and be stupid enough to return to Ronnie Sangster’s local. In the boiled egg example however, the swaggerer can be absolutely certain that he will never be required to swing a claymore in earnest since this would necessitate travelling back in time to a place he had never been, to cleave in twain someone he’d never met.

The moral of this tale is simple: stay away from geese, three legged whippets, one armed bandits, and above all, Ronnie Sangster.