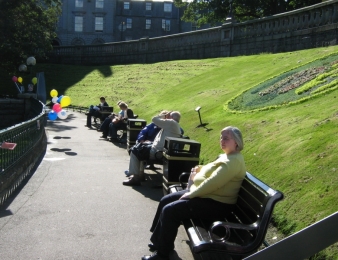 A proposal was made to discuss Thursday’s special council meeting on Union Terrace Gardens in private.
The reason put forward by the council lawyer was that the motion questioned the ‘validity and veracity’ of a report which led to the council’s approval to progress the City Square Project last May.

The public have every right to be concerned about this move. Too many details about the City Square Project are being withheld. Councillors are being briefed by council officials on the scheme’s progress, yet these briefings are not being made public.

These contain details such as timetables for the project and how the city square design is to be picked (the city square board selects the final design and the council will be asked to approve their choice).

Union Terrace Gardens is on Common Good land and belongs to the people of Aberdeen. It is our park and we have a right to be informed on any proposals for it.

Although the Council will probably retain ‘ownership’ of the land on which the Gardens are located, the building above it and the city square is likely to be owned by a private company in partnership with the council. The building will be about 5/6ths the size of Union Square. What will go into this enormous three-storey concourse given that the remit is that it will be a ‘civic and cultural’ space?

The latest idea is to put a conference centre in there, although this brings into question the fate of the Exhibition Centre at the Bridge of Don with which it would compete. Failure is not an option for the Exhibition Centre as it has been loaned £28m by the council. If the centre closes, then this debt will be transferred to the council budget with immediate and potentially calamitous consequences for the city’s finances.
See article: http://www.pressandjournal.co.uk/Article.aspx/1877056

An interesting perspective on the city square building was provided by an online comment made last week to the Press and Journal’s letters column:

“The design process for Union Terrace Gardens will be unlike most design processes. Most conventional designs tend to start with a use, before proceeding to a site and then a brief, and finally designs to enable a scheme to be built. For UTG this will effectively be reversed. This is partly because the scheme is opportunity led, but mostly because of the scale and significance of the expected design. This scheme will be, by its very nature, more akin to designing a new street in the city, than designing a new building.”
See article: http://www.pressandjournal.co.uk/Article.aspx/2205094#ixzz1IiidEav9

A limited company has appeared centre stage in the controversy and has been given control of the design competition. This is the Aberdeen City Gardens Trust, about which very little is known. Last week it was revealed that they have approached the council to invite them to be partners in the trust. The council have deferred the decision as they want to know more about the trust,  what they are letting themselves in for and the implications of this.
See article: http://www.pressandjournal.co.uk/Article.aspx/2205463

It is not only the council that needs to find out more about the trust, the public need to be informed about everything to do with this company. Who are they?

Much to do with the way that the proposed development of Union Terrace Gardens has been driven through is highly questionable.

The public were consulted and ignored when they voted no to the scheme. The council meeting last May was informed that the results of the consultation “clearly indicated a wish for change”, when they didn’t. Local businessmen urged the council to ignore the consultation, Acsef minutes for  the 20th April meeting state:

“There is a mandate from the business community to proceed to the next stage”.
See : http://www.acsef.co.uk/uploads/reports/21/13%20April%2010.doc

From then on, the project became ‘opportunity led’ and the public have been progressively ignored as it has progressed. Consultation has become two-way traffic between the project management board and the council; opponents of the scheme have been left scrabbling to find out what is going on.  A modern city square for the centre of Aberdeen is being imposed on us whether we like it or not.

From now on, the possibility of keeping Union Terrace Gardens is not on offer unless the Council votes against the city square, and so far they have not. Even the selection of a final design for the city square is being taken out of our hands. The businessmen and council officials on the project management board will take that choice.

If like me you think this state of affairs is appalling, join the Friends of Union Terrace Gardens through our website www.friendsofutg.org

We are campaigning to keep our city-centre park.