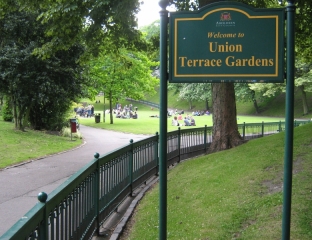 Last week, Mike Shepherd wrote an article on the next steps for the scheme to develop Union Terrace Gardens. Mike gives an update on this week’s events.

A timetable was published containing an item for the council meeting on 27th April when Councillors would vote on approving transfer of a lease for the park to a third party organisation, most likely a limited company or trust. This organisation was designated as a ‘Special Purpose Vehicle’ (SPV).

If approval for leasing the park were to be given, then this would have been about a year in advance of any planning permission being sought for the City Square Project.

This week, I was forwarded an email from the Council Executive stating that Councillors will not now be discussing the lease transfer next month. The following are direct quotes from the email:

“… On a more general point, the basis on which UTG could be available for development still requires to be carefully considered and shall, doubtless, be the subject of considerable legal scrutiny and Elected Member decision before any disposition is finally known.

“From having read your constituent’s comments … it may be the case that your constituent is referring to the “City Gardens Project Plan timetable for key decisions” report approved by Council on 6th October 2010 which highlighted the forthcoming Council meeting of 27th April 2011 as the date when a report would be presented to Council seeking approval, amongst other issues, for lease of land (UTG) to the project’s Special Purpose Vehicle (SPV) company.

“As detailed in an Information Bulletin Report to Council of 23rd Feb 2011, a request to Members to approve any lease will first be subject to the approval of a Business Plan by the SPV company prior to Elected Members being asked to take any decision regarding the terms upon which appropriate development rights may be granted to the Special Purpose Vehicle.  In other words, as work on the Business Plan etc is currently ongoing following the recent incorporation of the SPV company, Elected Members will not be asked at Council on 27th April to approve any lease or grant of development rights to the SPV.” 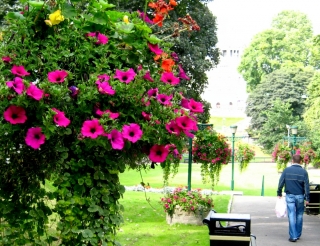 The timetable for progress on the City Square Project will now have to be revised and it is not known if or when the issue of transferring the lease will come up in future.

Last week also saw the appointment of the company to manage the design competition for the city square.

It is expected that the competition will be launched next month and short-listed designs will be made public by the end of September.
http://www.pressandjournal.co.uk/Article.aspx/2188050?UserKey=

The Press and Journal reported on Saturday that the City Garden Project managers were proposing to bid for funding from the Heritage Lottery Fund. Given that the scheme involves the destruction of the Victorian Union Terrace Gardens, replacing it with a three storey building and a modern roof garden, this did cause a bit of a stir in the city.
http://www.pressandjournal.co.uk/Article.aspx/2186720?UserKey=

One website has suggested how the City Square could ‘display and showcase our history and heritage’.

“Imagine walking under the new space with natural light filtering into an airy space that is bursting with historical documents and artefacts, currently held in the city’s archives, passing by studios and rehearsal rooms where dancers, actors and musicians practise, coming up onto street-level to be faced with displays showcasing physical pieces of our history and telling the story of our rich heritage.”

The vision of replacing heritage with a heritage museum angered a good number of Aberdonians, and emails were sent to the Heritage Lottery Fund in protest.  The head of the fund replied to the effect that they hadn’t received any application as yet, and as such they couldn’t comment. However, they did note the following:

“We expect all applicants for funding to consult with relevant stakeholders, including the local community, in the development of their projects and we consider this as part of our assessment alongside a wide range of factors.”

Much has happened in a week and more is to come next week. The Union Terrace Gardens situation is fast moving, complex and to some extent shrouded in secrecy. It is not easy to follow, or even understand everything that is happening. However, be assured that some Councillors are also starting to lose track of the situation and are making their concerns known.

The Gardens should not be given away to a limited company without time for due diligence on behalf of the elected members and it should most certainly not be railroaded through in the manner that published timetables suggested would be the case. Union Terrace Gardens has a real estate value worth tens of millions of pounds to the city.

To the citizens of Aberdeen they are of course, priceless.