The City Square Project is a highly controversial proposal to replace Union Terrace Gardens with a  three-storey building topped by a modern city square. This week, unlikely as it seems the scheme became more controversial as Mike Shepherd tells Aberdeen Voice. 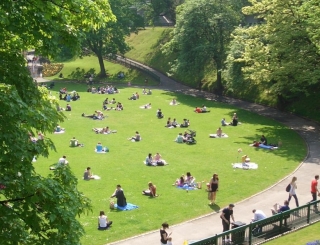 The local art group, Peacock Visual Arts, had planned to build a “centre for contemporary arts” in part of the Gardens. The £13.5 million building was to contain a gallery, a TV studio, a print studio, a restaurant and offices for Peacock Staff.

The intention was also to provide a base for Aberdeen City Council’s Arts Development and Arts Education teams as well as extra space for the City Moves dance agency. The project had been awarded funding from Aberdeen Council (£3 million), the Scottish Arts Council (£4.3M) and the Scottish Government body, Scottish Enterprise (£2 million).

After planning permission was granted to Peacock in August 2008 by the Council, Sir Ian Wood then stepped in and in November 2008 announced his own plans for Union Terrace Gardens, a civic square described by him as “a cross between the Grand Italian Piazza and a mini Central Park”.  Scottish Enterprise paid for a technical feasibility study for the City Square Project and then promoted the consultation to gauge public opinion on the issue.  Aberdeen Council now found themselves faced with two projects competing for the same lease of ground.  Councillors later decided at a full Council meeting in May 2010 to support the City Square scheme rather than the Peacock Visual Arts centre.

In reply to a recent question as to what was spent out of the Peacock grant,  Scottish Enterprise listed £190,000 spent on the technical feasibility study for the City Square Project and  £226,000 spent by Peacock on architect, design and project management costs. No indication is given as to when the agreements to do this were signed off.

Thus money intended for the Peacock scheme looks to have been allocated to a feasibility study for a rival project which ended up replacing the Peacock scheme itself as the Council’s preference (Scottish Enterprise, it should be said, have acknowledged that if the PVA plan had been approved they would have honoured the £2 million grant).

It was later reported in a Press and Journal article that Aberdeen Council had secured permission to use a further £375,000 of the grant funding for the City Square Project. What this money is to be used for is not allowed to be, as yet, in the public domain.

The Press and Journal  report states that the Peacock grant now stands today at  £1.2 million out of the original £2 million allocated. The grant was left open after the vote in May. According to information provided by Scottish Enterprise the money is nominally available to fund similar projects to the Peacock scheme until the end of March this year, at which point it has to be returned back to central funds.

The Peacock contemporary arts centre was effectively killed off by the May Council vote. Although Peacock had been asked to locate their arts centre within the proposed city square building, this proved unacceptable to them and there was no chance of an alternative proposal surfacing in time for the March 2011 deadline.

The Council executive confirmed to Scottish Enterprise in November 2010 that the Peacock funding was no longer required; they nevertheless made a request to reallocate the funds to alternative projects under revised terms. Kevin Stewart, the Council’s finance convenor, told the Press and Journal that seven proposals had been drawn up, costed and presented to Scottish Enterprise.

In response to a question I had asked him as to whether the money could be given to Peacock for new facilities, Cllr. Stewart replied that:

“Council officers put forward a number of worthy projects that could use the funding, including Peacock, but these were all rejected by Scottish Enterprise.”

The £1.2 million grant to Aberdeen Council from Scottish Enterprise now looks as if it will have to be returned to central government funds at the end of March. The Council monitoring officer has been asked to launch an investigation into the matter under the Local Government in Scotland Act.