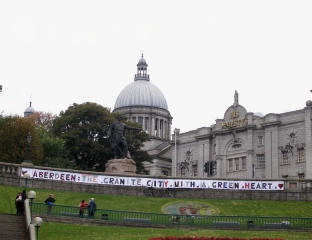 The end of another year approaches – the end of a bad year for democracy in Aberdeen and a year in which we have seen proposals for our city which many citizens find very hard to stomach. One proposal in particular would see the complete destruction of Union Terrace Gardens.

Sir Ian Wood made the city of Aberdeen an offer that our council simply couldn’t refuse; £50 million towards the cost (estimated by some to be well over £300 million in total) of building a “City Square” over Union Terrace Gardens. His parameters include raising the area to street level and connecting it with Denburn and Belmont Street. A public consultation ensued, plagued by problems with online voting. The results clearly indicated the people of Aberdeen did not want the City Square and the project lost the vote; 45% for the Square to 55% against.

However, after a fraught council meeting attended by many concerned citizens and a final vote resulting  in a stalemate (largely due to many abstentions from councilors who were perceived to have a vested interest in saving UTG), the lord provosts deciding vote decided the fate of the gardens. Past convention has dictated that a deciding vote from the LP should uphold the status quo of the current situation, however on this occasion he chose to move the City Square project forward.

His decision not only shocked the city but also destroyed Peacock Visual Arts plans for a new art centre that was to be built under the arches of UTG. Peacock had already secured planning permission and a huge majority of the funding needed to complete this project and although there were mixed feeling among UTG supporters about whether the art centre was a good idea, it would have preserved most of the gardens and provided much needed facilities including disabled access.

do your Christmas shopping AND help save Union Terrace Gardens at the same time?

The council now plans to borrow at least £200 million to complete the City Square project at a time when they are considering canceling music tuition for the city’s children and discussing closing parks and libraries.

They spent £300,000 on a public consultation that was ignored and nearly £500,000 funding Acsef (Aberdeen City and Shire Economic Future – the “public-private partnership” driving forward the development at UTG).  This “public-private” body has yet to receive any private funding.

They have already recruited volunteers to clean and repaint the arches, started getting the lights fixed and begun to investigate the possibility of reopening the beautiful Victorian toilets and installing proper disabled access. They have held many successful events including mass picnics, evenings of acoustic music and a car boot sale.

Now, this hard-working group is holding a festive get together in the gardens on the 18th of December at 1.30pm with mince pies, lucky dips for the kids, a brass band and carol singing, take a break from the Christmas shopping and enjoy some festive fun! 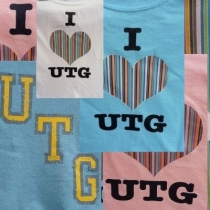 Do you want to do your Christmas shopping AND help save Union Terrace Gardens at the same time?

There will also be a  stall in the Trinity Centre on the 20th of December so put it in your calendar and get some Christmas gifts!

For an order form and more info; http://friendsofutg.org/contactus or email Saveutg@gmail.com.

FoUTG would like to wish all it’s supporters and those helping with the campaign a very Happy Christmas and a great New Year.