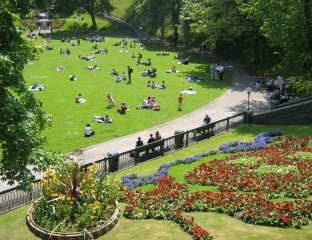 On April 27th, Councillors will be asked to vote to transfer the lease for Union Terrace Gardens to a third party body, either a limited company or a trust.

If the vote is passed, the Council will still nominally own the park, however control of the property will effectively be transferred by this action.

The public will not be aware of this coming up unless they have the skill and patience to dig through the multitude of reports on the Council website and find the appropriate report where this is mentioned. Even then, a subsequent report has only been issued to Councillors.

This came out on the 23rd February and includes a timetable for the City Square Project, the highly-controversial proposal to replace the city centre park with a three storey building and a roof garden. The relevant item concerns the full Council meeting on the 27th April as detailed below. Note that SPV is an acronym for Special Purpose Vehicle, essentially the limited company that will be designated to take the project through to planning permission and beyond.

“Paper to Council seeking approval of the SPV project business plan, approval to lease Council land to the SPV and permission for the SPV to take the project forward, subject to approval of the final detailed design scheme.”

In the next column is the following:

“ACGT will produce a business plan for the operation of the SPV up to the point where planning consent is obtained.”

this is an attempt to force the issue on the City Square Project well in advance of planning permission being sought.

Who exactly are the Aberdeen City Gardens Trust? This is a good question as you will find very little in the media about the company. My understanding is that the trust has been formed by the businessmen involved in funding the project as a means of finding extra private funds to finance it and to take on key tasks such as managing the design competition.

Additional information comes from the articles of association for the trust which can be purchased from the Companies House website. These mention two board members, businessman Tom Smith who is also Chairman of ACSEF and Colin Crosby who is President of the Aberdeen Chamber of Commerce. It is not known who else is on the board. However, it is clear that there is as yet no council involvement. The articles mention that the Council have the option at any time to become a special member of the group.

The objects of the company are stated and are as follows:

Elsewhere within the articles we read of the powers of the trust. Two of these powers are of note:

– to purchase, take on lease, hire, or otherwise acquire, any property or rights which are suitable for the company’s activities;

– to sell, let, hire out, license, or otherwise dispose of, all or any part of the propertyand rights of the company;

A Press and Journal article provides extra information about the limited company. It has recieved more than £400,000 from Sir Ian Wood’s family trust and has received a grant of £375,000 from Scottish Enterprise through funding available for major infrastructure projects (note that this £375,000 did not come from the Peacock grant as mistakenly reported in a previous P&J article). The company will also be responsible for managing the international design competition which is intended to produce designs for the proposed city square in August.

There are many issues involved; some of these are discussed here:

Control of the Property: If the vote is passed on the 27th April, Councillors will be approving to transfer control of Union Terrace Gardens to an SPV, likely to be a limited company / trust (possibly the City Gardens Trust). I have been told by the Council executive that the likely term of the lease will be 125 years. The Council will nominally own the property although a long term lease will in practice hand over total operational control to the SPV.

Implications for the Design Competition: We are told by the P&J that the City Gardens Trust will run the design competition. This does appear to limit the scope of the competition however. The stated objectives of the Trust are exactly in line with Sir Ian Wood’s strict conditions for the City Square Project, that is – walk on, walk off street level access from all four sides.

This precludes any options that consider decking over the railway line and road but keeping the Gardens substantially intact; or improving the existing Gardens only.  There are plans later this year for an item which the timetable describes as:

The word consultation has not been used here, although this is what the item appears to allude to. It has already been stated in a Council meeting that option to keep the gardens substantially as they are will not be included at this stage.  Thus the public will only be asked to ‘scrutinise’ between modern designs for Aberdeen city centre.

There are many in Aberdeen that are appalled at the loss of heritage should Union Terrace Gardens be built over with and a modern city square put in its place.  Now it also looks as if public control of the property will be transferred from the Council to a third party organisation about which not a great deal is known. If like me, you are appalled at what has been proposed and the way it is being done, write to your councillors and let them know what you think.