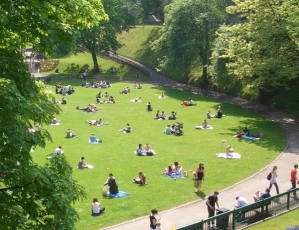 Over the months that the debate over the development of Aberdeen city centre has raged, one argument often fielded by those in support of the City Square Project is: “Union Terrace Gardens aren’t used.”
This raises the issue of “use” – what does it mean for a space to be used?

Here are some reflections on this.

Firstly, Union Terrace Gardens (UTG) are used. They are used by people, like most parks and open space, when the weather is good and people have the free time to use them. They are used regularly by people who live in the city and own a dog for example, or who have no garden of their own. They are used by office and shop workers when the weather is good and the need to take lunchtime relaxation is fulfilled by sitting in the sun rather than perhaps a stroll around the art gallery or shops. I know this because when I worked in Aberdeen city centre I used to struggle to get a seat in UTG on a sunny lunchtime!

They provide safe space for families away from traffic concerns. Union Terrace Gardens are used at the weekend by those who live close, and not so close, as recreation and relaxation space. They are used by visitors to the city who value them as part of their visit ‘experience’; that is as a part of what makes Aberdeen distinct as a place to visit. The above photograph  shows quite clearly the gardens in use on a good sunny Saturday.

Of course they are used in many other ways. They act to define the city space, to give a ‘green heart’ to the surrounding city scape. Because they are sunken they give a unique perspective on the city . Looking up from the garden towards His Majesty’s Theatre and St Marks with the Wallace statue in the foreground is one of the defining views of Aberdeen. Like the UTG itself Aberdeen would not be Aberdeen without it.

Ornithologists can spot the peregrines that nest on the ruined steeple of Triple Kirks. Bat lovers can gather at dusk to watch these enchanting mammals flit in and out of the gardens lamp light chasing their prey in a silent whirlwind. It takes a long time for a park space to achieve the diversity and richness that is UTG – destroy it and it would never be recovered. 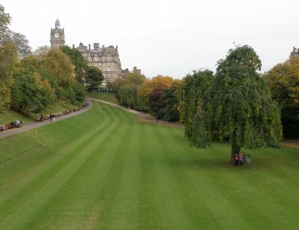 Just by being there, Union Terrace Gardens are used. This is in common with all city centre garden space. The photograph attached shows Princes Street Garden in Edinburgh.

Not packed – but valueless because of it?

One would hardly think so.

Edinburgh residents would never contemplate decking over this space. The gardens in Edinburgh are as much a part of the City as the Castle.

Of course Edinburgh do utilise the garden space in a far better way than Aberdeen. They are maintained better; at Christmas they are bedecked with lights and an ice rink installed. Aberdeen Council used to do this sort of thing too but over the years have allowed UTG to fall into disrepair. This represents an appalling neglect of a valuable public asset.

UTG is of course not used in a ‘commercial’ way. The commercial interests that would likely dominate any development on the site would doubtless seek to maximise the value of the space primarily in terms of monetary and commercial value. The City Square ultimately must ‘improve’ the space in this regard in order to have any chance of viability.

This discontent with Union Terrace Gardens seems to have some link with the need for Aberdeen to emulate somewhere else. But why?

Sir Ian Wood has argued that he wants to see a combination of a mini – Central Park (as found in New York City) and an Italian piazza. Central Park, co-incidentally, was established in 1873 – just about the same time as Union Terrace Gardens, give or take a few years . It serves a population of some 1.7 million people – and that’s just Manhattan without the other 4 Boroughs that go to make up New York as a whole or the tourists that frequent the city.

It has more in common with Union Terrace Gardens in terms of maturity, make-up and value to the community than anything that the much touted design competition for the city square might come up with. Central Park has history that makes it what it is today.

The piazza concept should give cause for concern. Wikipedia describes it thus:

“In Britain piazza generally refers to a paved open pedestrian space without grass or planting”.

Piazzas work in Italy and other Mediterranean countries because they have long hours of hot sunshine and, more importantly, a historical significance that embeds them in the country’s culture. You can’t import them into a place that has no connection with the way of life that they reflect. Look at the upper deck of the St Nicholas Centre to see how it works in Aberdeen.

This discontent with Union Terrace Gardens seems to have some link with the need for Aberdeen to emulate somewhere else. But why? Where Aberdeen has attempted such an approach the results have been dismal. Go to any of the shopping malls including the horrendous Union Square and you could be anywhere, in any shopping centre, in the UK.

Meanwhile the old E&M premises, an icon of Aberdeen, crumbles its way through another winter. The City Square Project will have the same effect; stripping away yet another facet of Aberdeen that actually makes Aberdeen, well, Aberdeen! As a consequence adding to the catalogue of destruction that has over the years de-valued the city’s architectural significance; eroding that which makes Aberdeen a unique and beautiful city.