Last year, Aberdeen was posted for sale on eBay. Come April, this may not seem much of a joke any more. Mike Shepherd explains why.

Two major events take place in Aberdeen this April which could change the political and actual landscape of the city for ever, when details of the assets to be transferred to the City Development Company are to be announced. Then on 27 April, the Council meets to approve transfer of a lease for Union Terrace Gardens to the limited company intended to develop the park. 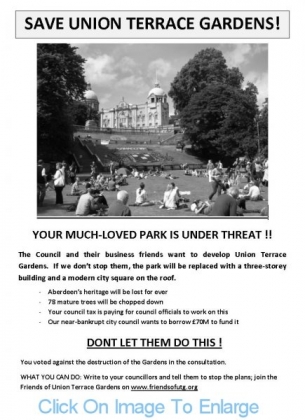 The Aberdeen City Development Company has recently been registered as a limited company. This is a joint venture between Aberdeen City Council and local businessmen. The intention is for the Council to transfer assets into the Company and for both the Council and the private businesses involved to profit share from the development of the assets.

Controversially, although the Council nominally controls the Company, six of the twelve man board will be from business. The chair will be a private sector appointee and will have a casting vote, meaning that there is private sector control of the Company at board level.

The Coun­cil has iden­ti­fied 59 assets which could potentially be transferred to the Devel­op­ment Com­pany. Of these, 14 have been short-listed as suit­able for devel­op­ment. The Coun­cil has not revealed which assets these are, although details should be made available at the April Finance Committee meeting.

The aims of the Company are stated as being charitable, with the idea of using the profits to regenerate the poorer parts of the city. A subsidiary property company will also be formed which will be used to sell off assets considered unsuitable for development by the main company.
https://aberdeenvoice.com/2010/11/aberdeen-for-sale-the-aberdeen-city-development-company/

On April 27, the full Council meets and it is likely that Union Terrace Gardens will dominate the agenda.  A timetable for the City Square project was issued for the Council meeting on 6 October last year.
http://committees.aberdeencity.gov.uk/mgConvert2PDF.aspx?ID=9525

In it, 27 April was earmarked for a vote that seeks approval to lease Council land to the company designated to take the project forward through and beyond planning submission. This company,  the Aberdeen City Gardens Trust,  was  registered as a limited company last month. 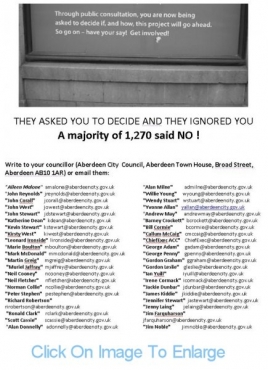 I’ve been told by the Council Executive that the Council intends to retain ownership of the land and would probably assign a 125 year lease for the property to the Trust. There is a major drawback to this though. Under recent Scottish Government legislation,  it is now possible for someone sitting on a long term lease to convert the lease into outright ownership.

It is likely that the Gardens have been partly built on common good land; however, even this may make no difference. The Edinburgh Evening News recently quoted a Scottish Government Minister as saying that a proposed exemption in this legislation for common good land would open the door to frequent and expensive litigation.

It also looks as if the Project Management Board for the City Square is hoping to launch the architectural competition in April. Councillors have been told that there are ‘procurement issues’ in awarding a contract to a suitable company to manage the competition. The company may not be in place before the end of March.

If the launch happens in April, expect a lot of public relations activity to go with this. They will be hoping to drown out the furore that will result from the proposal to transfer the lease.

The Scottish Parliamentary elections will be held on Thursday May 5,  only a few days after the April Council meeting. It is almost certain that the fate of Union Terrace Gardens will be a subject of major debate at the hustings. The SNP group leader in the Council, Kevin Stewart, will be standing against the current MSP, Labour’s Lewis Macdonald for the Central Aberdeen seat. Lewis only has a 382 vote majority from the last election and the SNP sees the constituency as one of their top targets. Kevin is a member of the board for the City Garden Project and the SNP councillors have mostly voted for progressing the project in Council votes. Cllr. Muriel Jaffray is a notable exception.

Kevin may have a hard job persuading local voters to support his views on the City Square. A recent poll run by Craig Adams indicated that out of a sample of 1,140 participants, only 87 (7.6%) supported Sir Ian Wood’s scheme.
https://www.surveymonkey.com/sr.aspx?sm=2wBkyUzY5LwdryXec_2b936w1BLixjo8dtX4egHwLTFbs_3d

Another event happens in April. The Royal wedding takes place on the 29th and the day has been declared a national holiday. Unless perhaps, you live in Aberdeen. The STV website has reported that Aberdeen Chamber of Commerce is carrying out a survey of its members to find out if they would give staff the day off and found that many firms were undecided.

Apart from a few local businessmen, Aberdeen may not be a happy place this April.