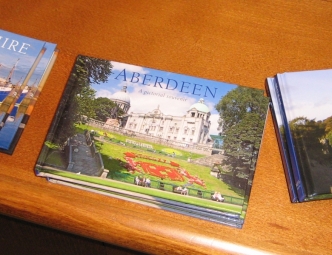 A document has appeared purporting to reveal and counter ‘myths’ about the proposed Union Terrace Gardens development.  It has been posted on the Aberdeen and Grampian Chamber of Commerce (AGCC) website.
Some of the claims are disingenuous and others stretch the idea of a ‘myth’ somewhat.

The City Square has always been seen as Sir Ian Wood’s project. Sir Ian announced his proposal at  HM Theatre in November 2008.  The Evening Express reported the launch with the headline;

A media quote picked at random clearly shows that it has invariably been perceived as Sir Ian’s project.

So exactly whose vision is it then, Sir Ian?

“What is referred to as ‘my vision’ is in fact the vision, aspiration and hopes of many, many Aberdonians for the future economic and civic wellbeing of our city and region as North Sea oil winds down.” BBC20/4/10

Excuse me, I don’t think so.

AGCC:  “Fiction: The City Garden Project will destroy the only green space in the city. Fact: It will create new, bigger, greener and more attractive gardens. It is about gardens and open, distinct spaces on different levels, using the natural slopes, for all sorts of activities.”

The development will destroy the existing Gardens and according to the technical feasibility study, all 78 mature trees including the old elms will be chopped down. It is hard to accept that the new “City Garden” could ever support mature trees on the existing scale.

This is the most disingenuous of all the ‘myths’ in the document.  The first draft of the design brief for the City Squarecalls for a …

…to be built in place of the Victorian park. Union Terrace Gardens was planned by Alexander Marshall Mackenzie, who also designed many of the surrounding buildings including the Art Gallery. If Union Terrace Gardens feel as if they belong, this is the reason why. The city square WILL destroy a key part of our history and heritage.

AGCC:  “Fiction: Aberdeen City Council is selling off public land for this project. Fact: The land involved will remain in public ownership.”

This is misleading as it doesn’t explain the whole picture. The land will most likely remain with the Council for the time being. However, the ground will probably be leased for a long period, 125 years has been suggested. A lease-hold on this time-scale while technically not ownership, is nevertheless a significant property deal.  Any structure on the land, including the so-called City Garden, will not be publically owned. This will belong to the private company or trust if they get planning permission.

We know that considerable Council officer time has been allocated to work spent on the project. We do not know if the City Garden Project intends to reimburse the Council for this or not. ACC minutes show that the Council lawyers have not yet signed  off the relevant project agreement that would allow this to happen.

AGCC: “Fiction: The City will be taking on-board future liabilities relating to the construction and operation of the City Garden.  Fact: The City has agreed to consider a TIF scheme to provide public sector funding for the project. This will involve the City borrowing funds to invest in the project. The project will stimulate new business investment and generate additional extra economic activity in the area, resulting in an increase in the amount of business rates collected in future years. This will be used to repay the loan plus the interest charges.”

Doh! – “Fiction: The City will be taking on-board future liabilities” but then we are told “This will involve the City borrowing funds to invest in the project”.

The Council are £562M in debt and cannot afford any more borrowing for anything. As has been explained on these pages before by Mick Miller, the version of TIF suggested for the City Square Project involves major financial risk. If the amount of business rates does not increase sufficiently to pay back the loan, then the Council get left holding the baby.

AGCC: “Fiction: The majority of Aberdeen public has voted against redeveloping Union Terrace Gardens. Fact: 11,000 people (less than 10% of the population) participated in the public consultation which revealed that just over half were against the proposal. Many of those were basing their decision on misinformation. The majority indicated a need for change and for the location to be more attractive and accessible.”

This is probably the most outrageous of the so-called myths. A public consultation was held, the public voted No by a significant majority and it was ignored. The public were told that their votes would count. Even Sir Ian Wood acknowledged this in an interview as can be seen on an STV located on Youtube.

“”The citizens of Aberdeen…  will have the right to choose. There will be full consultation, it’s coming to the end of it now and they will decide. And that’s democracy in operation. That’s great.”
http://video.stv.tv/bc/news-l2-gardens-190210/?redirect=no

“11,943 people went on to submit formal responses that have been recorded in the statistics.  This is a huge response rate when compared to similar style consultations. For example, the Edinburgh Tram consultation had just under 3,500 direct responses.”

“If views are roughly split there is an opportunity to say that although the public has spoken this is only in relatively small numbers.  Those wishing to see the status quo are in the minority compared to those who wish to see change such as updating and modernising the gardens.”
http://www.acsef.co.uk/uploads/reports/21/22%20March%2010.doc

The statement that the majority indicated a need for change is misleading, the majority said no to the City Square Project and did not endorse it.

If the public were misled during the consultation, who was responsible for the misinformation?  Where did these myths come from?

“It is now acknowledged by all involved that the absence of a reference design was a fundamental flaw in the consultation. The consultation asked if people supported the project or not but the common perception was that the conceptual illustrations, based on the technical study, represented a final design. Many based their decision on not liking what they believed was a final design.”
http://thecitygardenproject.com/background.asp

The proponents of the City Square do not accept that they lost the consultation fairly. They cannot believe that the public cogently preferred either the Peacock scheme or the preservation of the existing gardens to a modern city square. But this is what happened.

AGCC: “Fiction: It will be a flat, concrete square. Fact: This is not the case. The design teams have been given a very clear brief that new gardens and space which will have street level access from all four sides will use the existing topography of the site to provide a unique, dramatic and creatively landscaped setting to better reveal and blend with the surrounding historic architecture.”

OK guys, explain to me how you can ”raise the level of the Gardens to that of the surrounding streets” (the Council’s words not mine) and use the existing topography to any significant extent?  So where did the idea of a unique and dramatic setting come from?

Here is the description of the existing Gardens as noted in the City Centre Development Framework:

They have a “topography which provides a unique and dramatic setting for the surrounding historic townscape and bridges and an essential component of the identity of the City Centre. “

I suspect that this is just the start of a large PR campaign to sell the concept of the “City Garden Project” to the Aberdeen Public. It will have only a limited impact. Aberdonians are highly educated and can think for themselves. They can make their own mind up about what they want the city centre to look like, whether it is the existing Gardens or a city square at street level. They are smart enough to see what is plausible and what isn’t.