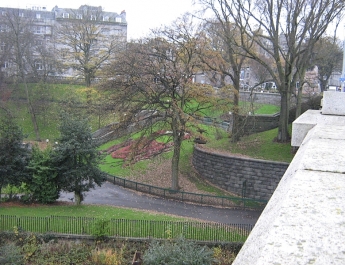 On Tuesday a Council committee voted to defer a decision on a referendum for the City Garden Project to the full Council meeting on the 14th December.

Although an amendment was introduced to propose an opinion poll as an alternative, a vote for a referendum looks more likely.

If such a referendum was to happen it would be held either two months before or two months after the local council elections on May 3rd.

This is one of many setbacks to have affected the City Garden Project (CGP). Here is a summary of the problems facing the scheme:

The City Garden Project is way behind schedule:  It is almost exactly three years since Sir Ian Wood announced his Civic Square proposal at His Majesty’s Theatre on the 11th November 2008. Although we are close to seeing a final design, the project is nowhere near planning submission and funding is very uncertain.

The vote on Tuesday looks to introduce further delays. It also probably shunts the planning decision well into the next Council, when at least one of the proponents of the scheme, John Stewart, will not be on the Council any more, having announced that he will stand down.

The City Garden Project is unpopular: This statement gets vigorously challenged by supporters of the CGP, yet it is clearly the case. The consultation held two years ago saw a ‘no’ vote for the CGP, and various online polls have shown a consistent numerical advantage to those wanting to keep the existing Gardens. The probability is that a referendum would reject the CGP.

The Design Exhibition failed to create any buzz in the city: The Friends of Union Terrace Gardens canvassed opinion outside the exhibition while it lasted. About half of those we talked to were unhappy about the designs. Many spoiled their votes.( by attempting to vote for the non-existent ‘option 7’.) Of those that voted, a common vote was for a design that appeared to preserve the Gardens (it doesn’t), although they reported they did this without much enthusiasm.

The land issue is a headache for the Council lawyers: Union Terrace Gardens lies on Common Good land and any land transaction, i.e. assigning a long term lease to a limited company or trust, would probably require an application to a court of session to apply for a change in status of the property.

The Council lawyers are well aware of the legal pitfalls that could ensue over the details of a property transaction (as witness the pending court case between Aberdeen Council and the Stewart Milne Group).

Currently,Union Terrace Gardens has negligible value as it is zoned as public open green space in the local plan.  However, should this status change at a later date and the property is re-zoned as commercial space, the land value will be in the tens of millions as prime down-town real estate.

The lawyers will have to be especially careful on this issue, particularly where a long term free-hold lease could potentially be assigned to a limited company.

Funding the City Garden Project is a big problem:  To date only £55M of private money has been pledged for a project nominally costing £140M. The CGP are pushing the Council to underwrite a loan of £70M through Tax Incremental Financing (TIF) to help part fund the scheme.

Aberdeen Council’s business case was so feeble it didn’t even rank in the top six schemes assessed for recommendation by the Scottish Futures Trust. Even so, the Scottish Government Cabinet Secretary for Infrastructure and Capital Investment, Alex Neil, has told Aberdeen Council that their TIF application may still be considered. However, the TIF would be awarded on a ‘geographical’ basis rather than an ostensibly ‘economic’ basis.

This can be criticised as very poor Government practice; it involves the allocation of scarce public money using non-economic criteria. It also begs the question that if the business case doesn’t stack up, why is the debt-ridden Aberdeen Council under consideration to be allowed to borrow money for it?

Questions are being asked in Holyrood about Aberdeen’s TIF funding. This is from an article by Steven Vass in last weekend’s Sunday Herald:

“First Minister Alex Salmond’s decision to permit Aberdeen’s £70M borrowing plan for redesigning the city centre will come under renewed fire when he is forced to answer questions in the Scottish Parliament this week.

“Lewis MacDonald, the Aberdeen MSP and long-time opponent of the scheme, said there was a “scandal lurking under the surface” around the permission. He has tabled a series of parliamentary questions demanding answers to speculation the Government’s approval overruled the economic advice of specialists at the Scottish Futures Trust, who were supposed to decide which projects would go ahead.”

Another potential show-stopper is that last year the Council decreed that borrowing money through a TIF scheme must present ‘zero risk’ to the Councils finances.  The only realistic way this could happen is if an organisation or individual was prepared to underwrite the Council loan.

This would be a major commitment to say the least, as it would involve underwriting £70M for a 25 to 30 year period. Perhaps Sir Ian Wood is willing to do this, but even for him or his family trust, it would involve a significant allocation of capital resources over a long term period.

Add to this the question of cost over-run. One architect told me this week that with the massive rock excavation operation involved and the difficulties of building over the railway line, there was no way of this project coming in on budget. Yet, very little has been said about what would happen if the costs do over-run massively.

The problems are stacking up for the City Garden Project and even three years later they are not much closer to being resolved. The patient is looking sickly and the prognosis is not good.