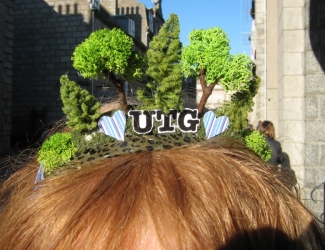 The design competition for the City Garden Project has just finished at the Pier in Belmont Street and the organisers say that about 15,000 have visited to see the six designs on display.

The Friends of Union Terrace Gardens canvassed outside the exhibition for the entire three weeks it lasted.

We managed to speak to many of the public as they came out and we asked them their opinion. Probably between 10 and 20% liked the designs and at least a half felt uncomfortable with them. Many had spoiled the ballots, particularly as the option to keep the existing gardens had not been included.

Of those that voted, option two (the one with the worm-like greenhouse over the middle of the railway) was preferred as it was seen as the least damaging. A couple of architects told us that this was probably the Norman Foster design. Our general impression is that the Aberdeen public were underwhelmed by the designs, more the woe factor than the wow factor.

I’m not sure it was made plain to those taking part that their vote was merely serving to give an indication to a jury who would actually make the final choice, not them. The jury includes Sir Ian Wood. The jury will come to a decision sometime later in the month.

Option two “the worm” is likely to be a forerunner. The bumph describes it as “Protecting the gardens, transforming the setting”. For some, it has a close resemblance to the Millennium option, which largely preserved the gardens but decked over the road and railway. The Millennium option was proposed for a lottery funded project in the late 1990s but was passed over.

However, option two does change the gardens despite appearances to the contrary.

The balustrades are removed on the theatre side with a wide series of steps leading down to a circular amphitheatre below. The famous crest disappears. On the Union Bridge side, the gardens ramp up to street level. It is clear that many of the trees will be removed.

There are early signs that the Friends of Union Terrace Gardens could be asked to compromise on this option given that it appears to be the least destructive. This will be an attempt to muddy the issue with the public.

Aberdeen City Council’s plan to use TIF for Union Terrace Gardens project will be progressed if public support for the project can be demonstrated.

The Scottish Government issued a press release on Tuesday about TIF funding. They have proposed six pilot projects whereby Scottish Councils will be allowed to borrow money for regeneration projects and capture the business rates generated to pay off the loan (Tax Incremental Financing).

Two have been approved and another in Glasgow is to be approved pending a local council vote.

Aberdeen was hoping to gain one of the three remaining slots but was unsuccessful. However, the Government did announce that “Aberdeen City Council’s plan to use TIF for Union Terrace Gardens project will be progressed if public support for the project can be demonstrated”. 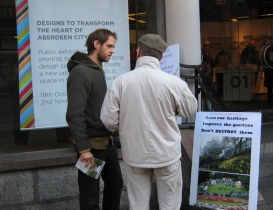 So the Aberdeen submission did not appear to meet acceptance for one of the six cases on business merits, yet is being given preferential treatment if the public like it.

Behind the scenes, Aberdeen Council have been lobbying hard to get an award.

Given that £70M of public money is involved here, it is alarming that the money appears to have been promised on grounds other than objective business criteria.

This decision has overtones of what Americans call pork barrel politics:

“Pork barrel is a derogatory term referring to appropriation of government spending for localized projects secured solely or primarily to bring money to a representative’s district.” (Wikipedia).

The instance on demonstrating public support would appear to make a public referendum more likely. This is not supported by the City Garden Project team. One of their members told us:

“I don’t think we should have a referendum because the public is not sufficiently informed to make a sensible decision.”

An opinion poll would be their preferred option.  The leader of the Council Callum McCaig disagrees. He told me in an email on Wednesday that:

“I’m quite clear that we need to have a referendum on the issue. Even the best opinion poll will come with a margin of error and if the result was close there would always be an element of doubt over the validity of the poll.

“Yes a referendum will not be cheap, but given the scale of the proposed investment, and the indication from the government that a clear demonstration of public support being required before they approve a TIF scheme, it is a price worth paying to have a definitive answer as to whether the public want this project to go ahead.“

The Council are currently investigating the options for running a referendum and a vote on this is due to take place later this month.

What would be the result in a referendum? Scottish Television gave an early indication when they ran a straw poll with over 1,100 taking part. Preserving Union Terrace Gardens was an option along with the six other city square designs.   74% voted to keep the Gardens.