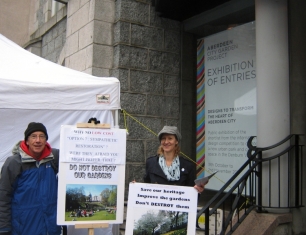 The next big event in the Union Terrace Gardens saga is the meeting of a Council sub-committee on Tuesday 15 November to discuss the holding of a public referendum on whether or not the City Garden Project should proceed.
Given events to date, it is not surprising that the  report for this meeting is proving highly controversial.

An eye-catching statement in the report  is that the referendum should be non-binding on Councillors. The report itself identifies an obvious problem here:

“Since the referendum has been proposed as a mechanism for advising Councillors, it should be non-binding. However, it must be recognised that this runs the risk of compromising the credibility of the referendum exercise.”

This was put more forcibly by Ron Campbell in a letter to The Press and Journal on Wednesday 9 November. Suggesting that this left open the
possibility that the project could go ahead even if voted against by the majority, he wrote,

“So, it’s just a re-run of the previous ‘poll’. Heads you lose, Tails you lose. Brilliant. What’s the point of  a referendum if you ignore it?”

The report suggests that the reason for the non-binding clause is that there could be conflict with the planning process. What this conflict could be is not clear.

Councillor Kate Dean had a go at explaining this on Facebook,

“It’s not appropriate for me to go into detailed discussion of a Committee report before it is considered by the Committee. However, the problems would arise if the referendum says yes and the resultant Planning Application doesn’t meet the appropriate criteria to be approved.

“Please note, I’m not giving any opinion on the answers to any of the above, simply a flavour if the advice which has led to that  recommendation.

“Obviously, if the result of the referendum is a “no”, none of these scenarios applies, but surely it would be unwise of the Council to go into anything without exploring the implications of all possible outcomes.”

Somebody on Facebook suggested that you could get round this by making a Keep UTG ‘yes’ vote binding, but the build the City Garden ‘yes’ vote, non-binding.

The credibility of the referendum is clearly an issue. Another concern is that the question asked could be rigged to create a psychological bias. The suggested question in the report is,

“Please indicate whether or not you support redevelopment of  Union Terrace Gardens, in accordance with the Aberdeen City Garden Trust Ltd’s preferred design proposal, by ticking one of the following boxes:

NO, I want to retain the existing Union  Terrace Gardens”

There is definite bias in this question. The City Garden Project is the positive option, retaining the existing Gardens is the negative option. It should also be mentioned that neither side actually wants to maintain the status quo. The Friends of Union Terrace Gardens would like to see a sympathetically-restored park.

The report mentions that the wording will be up for public discussion; however the Council has the final choice on wording.

“The proposed wording for any ballot paper be placed on the Council’s website for a period of at least two weeks, so the public have a chance to comment on this, or propose alternatives. The Council would take account of these comments before determining the final question.”

There are good reasons for the Council not to oversee the referendum. The Council report itself indicates clear support for the City Garden Project describing it as “a vital piece of social, cultural and leisure infrastructure”. This is not impartial. The alternative is that the referendum should be run or overseen by the Electoral Commission.

One of the reasons for holding a referendum, probably in late February, is that the Scottish Government has made it clear that TIF funding will not be progressed unless public support has been demonstrated for the City Garden Project.

In a further development, the criteria by which Aberdeen‘s TIF case has been assessed is also under question. An article in last week’s Sunday Herald (6 November 2011) questioned the criteria for including Aberdeen as an additional case, after awarding the three remaining TIF schemes.

“In an interview with the Sunday Herald, the Cabinet Secretary declined to say whether it scored fourth on the SFTs list, stoking speculation that it was moved ahead of other projects for political reasons. If Aberdeen did not come fourth on the list, the council that did is likely to be disappointed to have been turned down.”

“We are not disclosing the ranking because the SFT’s advice was based on the narrower economic conditions, whereas we then applied other criteria, primarily a geographic spread because it would be unfair to concentrate the TIFs in one part of the country.   We are not getting into publishing ranking tables at this stage.”

The idea of a geographic spread for the TIF cases is inconsistent with previous statements. The Government web page makes the position on TIF clear:

“The Scottish Government tasked the Scottish Futures Trust (SFT) with developing appropriate criteria for the potential application of TIF in Scotland and to work with local authorities in developing their proposals. SFT will need to be convinced, on behalf of Ministers, that the economic case for a particular TIF is clear.”

One other problem for TIF is that Councillors have stated that any loan through TIF should involve no financial risk to the Council. The problem with this was highlighted in a Holyrood Magazine report on TIF:

“Councillors have also insisted that the project must pose “zero risk” to the city’s finances. That is an additional hurdle, admits Brough, but it also acts as a litmus test for the viability of the scheme.

“If we can get someone to provide that guarantee, our business case is solid; if we can’t convince someone to underwrite the risk, then it’s too big a risk,” he says.”

One can’t help feeling that the City Garden Project has turned into a murky, political and economic quagmire. If it’s bogged down in a procedural mess, it’s arguably a consequence of ignoring the vote on the public consultation two years ago.