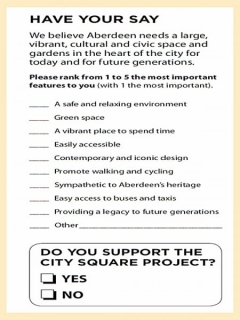 Alex Salmond has suggested that the way forward for the City Square Project would be to hold a public referendum on the issue. The First Minister gave a question and answer session at Pittodrie Stadium the week of the Scottish parliamentary election.

He was asked why the result of the public consultation on the city square had been ignored given that it had been funded by Scottish Enterprise, part of the Scottish Government.

He replied that once the final design for the city square had been picked, then a public referendum by ballot could be held. Keeping Union Terrace Gardens as they are would be one of the voting options. He stressed that this was his opinion only and he wouldn’t guarantee that it would become policy.

There was surprisingly little publicity on this statement. A Press and Journal reporter was present at the meeting yet the comment was not written up for the newspaper. A few days later it was mentioned in a small paragraph in the Evening Express.

Would a referendum on the city square be a good thing or a bad thing? My opinion is that it would certainly be an advance on what is currently proposed; that is, the public scrutinise and comment on 5-7 designs for a modern city square, the city square board pick the final design and keeping the Gardens would not be an option at this stage.

A referendum would go some way to salving the poisonous feelings in Aberdeen over the ignored consultation and the manner by which the city square has been forced through by local businessmen and politicians in the face of hostile public opposition.

However (and it is a big however), can anyone be trusted to run a referendum after what happened with the public consultation on the city square? This was so badly handled that the use of the word ‘consultation’ now has connotations of a total breakdown in public confidence with local government.

If a referendum were to be run on the City Square / Union Terrace Gardens issue it would have to be credible and worthy of public trust.  It would also have to avoid the mistakes of the public consultation. These are the issues:

“Have Your Say: We believe Aberdeen needs a large, vibrant, cultural and civic space and gardens in the heart of the city for today and for future generations.”

“acting on and incorporating their feedback where appropriate”.

The organisers also  screened and analysed the final results of the consultation.

A public referendum would not be a level playing field. One side would have the major levers of money, power and influence in conjunction with a favourable local press and a big public relations campaign; the other side would be operating mainly at a grass roots level with limited finance and media coverage by comparison.

However, there is one more lesson from the public consultation. Despite all the public relations puffery, the people of Aberdeen were smart enough to see through all this and think for themselves. My opinion is that if they do hold a public referendum, the city square would be thrown out.