The Council will be voting on Wednesday on proceeding with either a referendum or an opinion poll in an attempt to resolve the controversy over the fate of Union Terrace Gardens. Mike Shepherd reports that the outcome of the issue on a referendum question has already turned into a total mess. 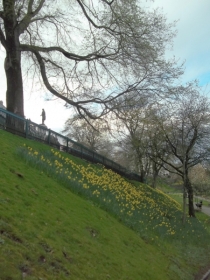 One of the issues that has been recognised is the need to ensure that the wording of any question asked is fair and acceptable to both sides.

On this basis, both the Friends of Union Terrace Gardens and the Aberdeen City Garden Trust were asked to concur on a suitable question for councillors to agree on at the full Council meeting on the 14th of December.

In practice, this would involve a council officials acting as a mediator.

In good faith, I submitted a group suggestion for the question to the Council as follows:

Which option do you support?

Very simple, clear and nothing controversial, you would have thought.

The Council Officer replied with this:

“For your information, based on the responses I have received, the proposed question that I will now be recommending to Council on 14 December (subject to final, last minute consultation with other Council Officers), is as follows:

Which option do you support? (please place a cross in the appropriate box)

“I feel that this is a reasonable compromise and trust the FOUTG agree that this represents a fair and balanced position. Kind regards, Gerry Brough.”

I agreed to this. So what happens next?

The Aberdeen City Garden Trust left it to the last possible moment to object to this, allowing no time to be made for any compromise. This was at about 5pm on Monday night this week, when the final wording was needed for the Council report first thing Tuesday.

“Further to my earlier note, I can confirm that ACGT have replied this afternoon asking for some changes to be made to the proposed question, so that it reads as follows:

Which option do you support ? (please place a cross in the appropriate box)

“They also feel that since retention of the gardens is placed at the beginning of the introductory paragraph, it is only fair that the option for supporting the proposed City Garden project should be the first option on the ballot paper.

“Can you please indicate whether these changes are acceptable to FOUTG.

I replied that the proposed wording was highly ambiguous, confusing and gives far more wordage to one side than the other. The Council official then decided that as the two sides could not agree on the referendum question, the councillors should decide at the full Council meeting next Wednesday instead.

“Since it was not possible to obtain complete agreement prior to the submission of this Council paper, Council are therefore asked to take a view as to whether they would prefer to endorse the question in 5.3 d), 5.3 e) or 5.3 f) or, indeed, whether they wish to propose a further compromise between these three positions.”
http://committees.aberdeencity.gov.uk/mgConvert2PDF.aspx?ID=17676

I complained bitterly about this as what had happened here was highly irregular.

“We participated in good faith last week. The ACGT only replied last night, too late. This has stalled the process of mediation as recommended by councillors. This is unacceptable.

“We are not at fault and should not be penalised for this. We insist that our question should stand. This does not bode well for a fairly conducted referendum and we may have to reconsider our options. – Mike”

I received this reply from Mr Brough (this is the last bit of the email):

“Nobody is being penalised.

“As you can see from the attached 5.3 that I sent to you, the process for determining the question is set out clearly up to the final submission received before the paper needed to be submitted. Council members are then being asked to either choose between these latest proposals, or come up with an alternative of their own that they consider to be fair and balanced for both parties.

“I understand your desire to undermine process, as a means of campaigning against any development of UTG. However, in this case, I believe that you are stretching a point to suggest that you have been in any way treated unfairly

“Also, although you “insist” that the FOUTG question should stand, FOUTG need to accept the fact that any referendum will be run by the City Council and that it is ultimately for the Counting Officer to decide, after consultation with Campaign Groups, on a suggested question.

“At a statutory referendum, the question is set by parliament, through consultation and, although there are no rules for the Council to follow, best practice suggests this should be done by the Counting Officer. This is the view expressed by the Electoral Commission.

“The Council are therefore putting in place a process to test various proposed options in advance of the Council Meeting, so that both Council and the Counting Officer can have some comfort concerning the appropriateness of the question.

I now have a series of meetings with Councillors and the Council Executive to discuss what has happened. I will make it clear that the ongoing participation in a referendum depends on both sides being treated fairly. However, this is not a good start.