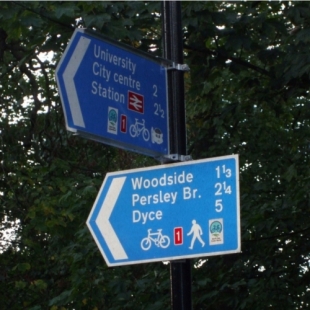 In Town Without My Car Day takes place every September in cities across Europe (and beyond) is an event designed to promote awareness of alternatives to the car for accessing city centres and serves to promote sustainable transport that can help reduce pollution in the urban environment.  It forms an element of European Mobility Week – but will we see In Town Without My Car Day in Aberdeen this year? NO.

‘What about Getabout’s Belmont Bike Festival ?’,  you say – well; few would consider that an ITWMC Day and the sorry tale of how this event came to be held onBelmont Street serves to highlight Aberdeen City Council’s commitment to sustainable transport and the environment.
http://www.get-about.com/news_full.asp?id=167&curpage=&search=clear&section=news

This was presented at the Aberdeen City Council Enterprise, Planning & Infrastructure (EP&I) Committee Meeting on 24th May 2011, which suggested thatAberdeen host an ITWMC event in 2011 and requested that Union Terrace be the venue :

“Union Terrace remains the optimum location given the nature of the space required, the potential to use Union Terrace Gardens for some elements, the visibility of the event and the significant footfall that will be attracted and the fact that the Council already has special event temporary traffic management measures in place for the regular closing of Union Terrace for the International Street Market, and members of the public and transport operators are familiar with such diversions.”

Sounds great – Union Terrace is, of course, regularly closed for the commercial streetmarket that runs Friday – Sunday, so there should surely be no issues with closing it to hold this important one day environmental event and the proximity of Union Terrace Gardens gives extra space for say, cycling demonstrations, discussions of the visionary proposals for a Denburn Woonerf etc.
http://otheraberdeen.blogspot.com/2011/04/woonerf-for-denburn-valley-proposal.html

Union Terrace is also ideal as it is itself part of National Cycle Route 1 which in addition to being a popular commuter route in town, runs all the way from Dover to John o’ Groats (then on to Orkney and Shetland via the ferry). Sounds like it should be a done deal, but, EPI/11/140 goes on to say :

“Should the Committee feel that the impact on the road network and the travelling public will be such that they cannot support such an event on Union Terrace, officers will instead initiate proceedings to hold a smaller-scale event on Belmont Street on Saturday 17th September (although September 24th is the preferred date for the event, Belmont Street is hosting the Aberdeen Country Fair that day).”

So if the “optimum location” at Union Terrace – which can be shut on a weekday and all weekend for the street market – can’t be used the event will be held on Belmont Street … but not on the ideal date as that street is already closed for a regular street market then.

In fact, not only is Belmont Street already pedestrian-dominated (so it’s hardly a major concession to close it for a day), the council’s website notes that Belmont Street will be “closed at regular intervals throughout 2011” – indeed 24th September, 29th October, 26th November, 3rd, 10th, 17th & 24th December are already listed (no mention of 17th September yet though ??).

This point is noted in the original report which states :

“Although this would not strictly qualify as an In Town Without My Car Day event, as it would take place on a predominantly pedestrianised street, and would be of a significantly lesser scale, the space available should be such that some of the proposed attractions could still take place and the event should still be visible enough to attract a large number of visitors.”

Yes indeed, having the event on Belmont Streetwould not constitute a true ITWMC event.

In fact, looking at Section 4 of EPI/11/140 we see just how little commitment to the event there is. In Section 4.1 we read

Well yes, isn’t that the whole point of closing off a street FOR ONE DAY a year?

“Public transport operators have been consulted on this proposal and they have significant concerns, stating the location is inopportune because of the disruption this will cause to bus services”

Disruption? That’s rich coming from First Aberdeen – look how they just closed the Bridge of Don Park & Ride site from 5th – 10th September. On another note, do you think bus operators want people to get into the habit of cycling into town?

(4.2) “The closure of Belmont Street would have minimal impact on traffic movements as vehicular access to Belmont Street is restricted and no public transport services use the street”.

(5.6) “… Closing the road on a weekend day should also limit any inconvenience to commuters and businesses.”

The minutes  of the EP & I Meeting of 24th May 2011,record that the committee resolved:

So we end up with the Belmont Bike festival.

I hope the event is a great success but think it could have been so much more. Keeping cars off what is an effectively pedestrianised street for a few hours on a Saturday really sums up Aberdeen City Councils level of commitment to the whole notion of cycling as a form of urban transport.