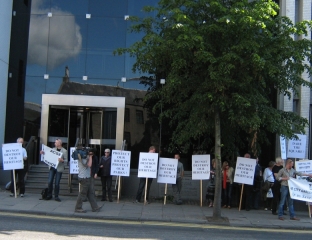 Six architects are busy designing a modern square and a subsurface concourse for the proposed development of Union Terrace Gardens. The public can expect to see these designs in early October. The architects have been given a design brief by the project implementation team for the City Garden Project, telling them what it is they are expected to design.

Only part of the brief has been made public; most of our councillors still have not been fully informed as to what the architects are being asked to do with our public, open, green space.

Yet, the intention had been for the councillors to sign off the design brief, but this never happened. Councillors are informed about the City Garden Project in a series of meetings for a group called the Project Monitoring Board. The minutes of the meetings are posted on the council website. The April minutes state:

“MRC (Malcolm Reading Company – the company managing the competition) will produce a comprehensive design brief and this will be submitted to Council on 29 June 2011, for ratification, before being issued to the short listed companies.”

“Mr Brough informed the group that the project management group had met on Monday the 6th June and had discussed and also amended a draft of the brief that Malcolm Reading has written up. The final brief will go to council on the 29th of June for noting. Mr Brough informed the group that the brief for the design didn’t go into much detail and may seem vague as the brief needed to allow some leeway and not be too prescriptive to the architects.”

This document was provided to councillors and gave some vague details as to what was expected of the architects including a specification for “ a contemporary 21st century garden”. I was present at the Council meeting on 29 June and the design brief was never discussed. There was a lengthy debate on allowing smoking in homeless accommodation and that was more or less it. I asked the council executive why the design brief had not come up. I received this reply on 3 July, just after the council meeting:

“I reported to the Project Monitoring Group what was intended at the time of the meeting. However, it was subsequently decided, by members involved in determining the Agenda for Council meetings, that there was no need to obtain Council approval for this and that it should go to Council as an attachment to the normal quarterly City Garden Project Bulletin report.

“Also, the brief still has to be finalised, by the addition of various technical annexes, before being issued to short-listed companies on 21 July.”

This makes it clear that the brief had not been completed by the time of the council meeting on 29 June, and that ‘members’ had pulled the item from the agenda. The document provided to councillors was not a finalised version. I wrote an open letter to councillors criticising the decision not to allow councillors to ratify the design brief. https://aberdeenvoice.com/2011/07/an-open-letter-to-our-councillors-city-garden-project/

“You have now lost control over the City Garden Project. A non-elected body has now made decisions as to what our city centre should look like. They have decreed that the Denburn should have a “contemporary 21st century garden”, not you. It is this body that is also deciding what the large underground concourse should be used for. If conference and exhibition facilities are to be provided, then this will clearly have implications for the future of the Aberdeen Exhibition and Conference Centre at the Bridge of Don. However, this is not a decision that you will have any control over unless you turn down the city square plans.”

The public should be extremely worried about the loss of democratic control over the City’s assets. The public was ignored when they voted against the City Square in a public consultation last year, now the powers given to our councillors are being bypassed too.”

This was repeated in a letter in the Scotsman and later partly republished by Private Eye. The result was a major row in the council chambers, which still has not died down yet. Some councillors and council officials were very upset at the statement that councillors had lost control over the City Garden Project. Others were annoyed that they had not been allowed to debate the design brief. Labour Councillor Willie Young asked a series of questions at this week’s Council meeting.
http://committees.aberdeencity.gov.uk/ieListDocuments.aspx?MId=1972

One of the questions was:

The Chief Executive replied to this as follows:

“No. Any party does so at their own financial risk. However, the Council by virtue of their decision of May 2010 and those of subsequent meetings have noted and encouraged the course of action undertaken by the City Gardens Trust.”

The following request was also made:

“Council agrees that in order to provide proper scrutiny over an area of land currently under the City Council’s direct control, and to ensure that no citizen or citizens of Aberdeen can accuse the Council of “losing control” over the City Garden Project, as well as to ensure beyond reasonable doubt that there will be a local democratic audit of plans for an area of the city centre that many Aberdonians care passionately about, Council undertakes without delay to determine a design brief to be provided to architects which meets the requirements of the citizens of Aberdeen as approved by elected members, the democratically elected guardians of this fine city.”

This was not debated at the Council meeting on Wednesday. However, I’m told it will come up for discussion at a later Enterprise, Planning and Infrastructure sub-committee meeting.

I would ask councillors to stand up and assert themselves on this issue. You are our elected representatives. There should be local democratic control over our public open green space, its function and its utility.  It’s not up to a bunch of businessmen and their friends to decide what our city centre should look like. Nobody voted for them.