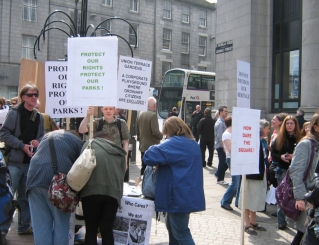 The Council have decided to keep Union Terrace Gardens as development opportunity in the new Aberdeen local plan despite hundreds of objections to this.

A report to Council on Wednesday (27th April 2011) lists over 360 objections and only two in support.

Numerous objections are listed in an appendix to the report. These are typical:

“Union Terrace Gardens could be sympathetically improved by one or more of the following: providing access down, reopening the toilets, covering the railway and dual carriageway and opening shops, cultural facilities and cafes in the archways.”

“In line with the city’s policies, it should be subject to conservation orders, like Duthie Park.”

“Union Terrace Gardens is the most obvious remnant of the Denburn the tributary of the Dee that saw the earliest habitation. It is an important topographical feature that also highlights the significant engineering features of the Union Street bridge and Rosemont Viaduct. Without the gardens these features become unintelligible and the centre of Aberdeen‘s history is much the poorer.”

The Council position is stated as follows:

“Whilst there is clearly a high level of debate regarding the Gardens it is our contention that it is important to identify that options for the redevelopment of the Gardens are currently under consideration. Any development proposal for the Gardens will need to be considered against the Local Development Plan, including the City Centre Development Framework, which sets out criteria for the future of the Gardens. The scale and nature of any improvements will be subject to other consultations and ultimately a planning application.

Once the local plan has been approved by the Council, the next stage is for the plan to be independently assessed by a reporter. It is to be hoped that this issue is picked up and dealt with by an examination in public, not the least because a quarter of the 1,544 representations received on the plan concerned the Gardens.

The Council seem to be determined not to listen to the public on Union Terrace Gardens. They also ignored the outcome of the public consultation on the city square even though a majority of 1,270 said no to the development of the park.

… is difficult to take seriously in this regard. The Council appear to be only interested in one outcome and it’s not what the public want.