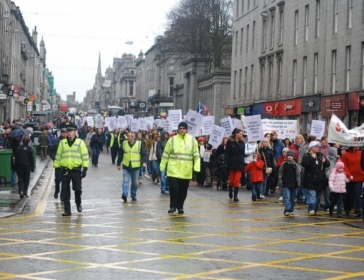 This Saturday, trade unionists, socialists, environmental activists, students and working people will march in Aberdeen to mark International Workers’ Day, more commonly known as May Day.  In so doing, they will be joining with thousands of people all over the world in commemorating the struggle of the labour movement against injustice and exploitation.

Yet, May Day is not just an opportunity to celebrate the victories of the past, but also to continue that struggle today.

Historically, the day has been used to campaign for the current demands of the movement, from the eight-hour day at the end of the nineteenth century, to the anti-capitalist assertion that “Another World is Possible” at the turn of the millennium. This has also been true of May Day marches in Aberdeen, which have taken place here for over one hundred years. In 2007, the Save Our Services campaign against the closures of schools and the Glencraft factory swelled the march to well over a thousand people.

In 2009, no march took place, as the City Council imposed a £2100 charge on Aberdeen Trades Council, the organisers of the march, for the use of Union Street.  The decision to effectively price out democracy and dissent was undoubtedly informed by the potential of the march to be used to voice general opposition to the council.

A compromise would seem to have been reached, with last year’s march only going from St. Nicholas Kirkyard to the Castlegate, where a rally is traditionally held, rather than the length of Union Street.  This will be the case again this year.  Nevertheless, the march presents the perfect opportunity to campaign against public spending cuts at local and national level.

Aberdeen Against Austerity ( mailing list at aberdeenagainstausterity@lists.riseup.net ) will be joining the march to voice our opposition to these regressive and unnecessary measures, and to argue for an alternative programme of taxation and investment. All are welcome to march under our banner, but the important thing is to be there, whoever you march with.

Aberdeen May Day march
Saturday 30th April
Assemble on Back Wynd at 11am.
The march starts at 11.30am.