The first run of a beautiful new calendar depicting the unique and stunning scenery of the Menie/Foveran coastal area has proved so popular that it has already sold out – within 3 weeks of production. Apart from raising funds for the Tripping Up Trump campaign, the pictures bear witness to the beauty and wildlife of the dunes and draw attention to the on-going destruction of a Site of Special Scientific Interest. A second run of the calendars is now being negotiated and will be available for sale in the coming weeks.

Indeed, despite a marked lack of coverage in most of the local media, this has been a very busy period for the Tripping Up Trump campaign as Rohan Beyts tells Aberdeen Voice;

‘”What with producing our newspaper, preparing the calendar, mounting an exhibition and organising the March of Menie it has been a period of intense activity for all of us. 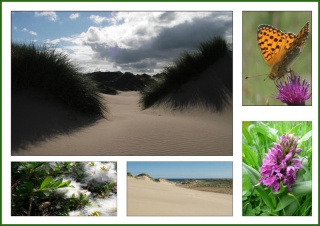 While it seemed that the media could not get enough of Trump – threatening householders, running for president, claiming that his resort had been a ‘done deal’ and posing with his new doctorate – we decided to focus on the real issues – the loss of a wonderful national asset and the effects on the local community.

So the idea of putting on an event was mooted, a walk possibly in the dunes before winter set in, a show of support for the threatened householders and an exhibition close by to get across what the local press has not been saying.  There were a few obstacles and time moved on. Was it going to be too much?

On 16th September came the announcement of that Degree.

We decided to do the walk – The March of Menie – from Balmedie to The Bunker in support of the householders.

Then there was the exhibition. It was a lot to organise in a mere 3 weeks but TUT is more than 2 people and a dog so we did. Could we get a suitable venue for the exhibition? Would the calendar be ready?  Could we get the newspaper out?  Yes, Yes and Yes again.

Despite information from the police to the contrary there was good route all the way to The Bunker.

On Saturday 9th October the March set off (a short delay was filled by some excellent drumming) with dogs, grannies, mothers, fathers, grandads ,sons, daughters, farmers, fishermen, workers, students, greens, socialists, lib dems, tories, graduates, soldiers; we had them all walking the dunes to the Bunker led by an excellent young piper and representatives of the families.

The Police and the Evening Express estimated 250 on the march so draw your own conclusions.

The calendars and David Milne’s book ‘Blinded by Bling??’ [Still available via Waterstones or Amazon] sold well at the exhibition. The calendar all but sold out in 10 days from the first production of 250 with no publicity other than word of mouth.

If you would like to pre-order from the next reprint e-mail me at r.beyts@btinternet.com and I will let you know when they will be available through the website. They cost £5.00 each plus P&P.”

Aberdeen Voice understands there have been a number of enthusiastic comments from those – including some professional photographers – who have already bought the A3-sized calendar; 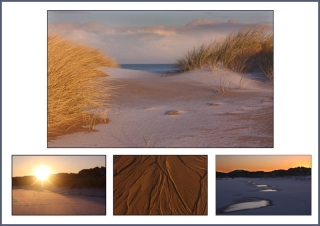 ‘Amazing, the pictures are fantastic.’
‘Wow, it shows just what we are in danger of losing’
‘Great value, that’s my Christmas presents sorted.’
‘Love the pictures and all the information on the back.’
Aberdeen Voice wishes TUT all the best of luck with the calendar, and are grateful for permission to reproduce those beautiful images.