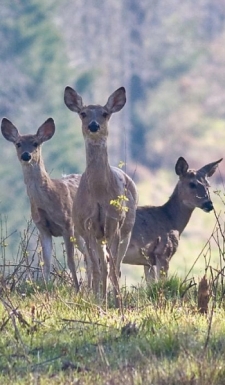 On Saturday April 2nd from 12.30pm onwards on St. Nicholas Street, Aberdeen Animal Rights will be protesting Aberdeen City Council’s plans to proceed with a deer cull on Tullos Hill – despite growing opposition amongst the public to any such plan.

The cull, should it go ahead, is the city’s answer to the problem of Roe Deer feeding on trees planted as part of the city sponsored Tree For Every Citizen project which involves the planting of some 210,000 trees in several city locations including Tullos Hill.

Aberdeen Animal Rights will be distributing leaflets and collecting signatures on a petition, which will then be handed in to the council in the hope that they will see sense and change their mind on the matter.

City councillors had met on March 1st and decided on the advice from both Scottish Natural Heritage and the Forestry Commission, that a cull was not only necessary, but the only option, ruling out non-lethal alternatives without proper investigation and without consulting those bodies whose findings and research conflict with SNH and the FC.

More confusing still was the city’s declaration that if £225,000 could be raised by animal charities opposed to the cull, then it would stay the cull, using said funds to erect deer-proof fencing. A rather odd decision and one that contradicts SNH’s advice upon which their decision March 1st was based.

City councillors have also shown a shocking disregard for local democracy and local opinion, with one councillor even giving a false account to the Press and Journal of the number of comments received from local people.

Far from being the best solution, a cull could indeed have little or no effect on local deer numbers, with shifting populations rendering any cull ineffective. A sensible solution however would be to erect deer-proof fencing and/or fit tree guards to those trees most at risk. If the city could not properly undertake a tree-planting scheme of this size, with the use of measures preventing any damage to these trees, bearing in mind the costs involved, then it should not have undertaken it at all, or perhaps have waited until it had the means to do so.

Aberdeen Animal Rights is a local group made up of individuals of various backgrounds and experiences who have come together to campaign against all aspects of animal abuse. We use a variety of entirely peaceful means such as pickets, letter writing, petitioning, info stalls, and more, to campaign against the use of animals for food, entertainment, sport, clothing, or for purposes of vivisection. For more information visit http://aberdeenanimalrights.org.uk

If people would like to become involved in protesting against the planned cull of deer on Tullos Hill, either come along on Saturday to sign the petition, or alternatively contact us at:  mail@aberdeenanimalrights.org.uk