Voice’s Fred Wilkinson shares a letter sent to Councillor Aileen Malone in response to a grossly innaccurate and potentially damaging comment attributed to her in The Press And Journal Tuesday 2nd March. 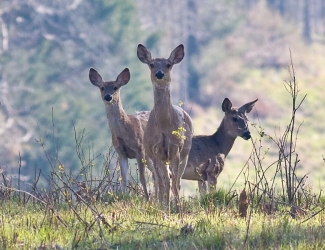 Having contacted you ahead of the meeting to discuss the roe deer cull on Tullos Hill, I am sure I don’t have to tell you how I feel about the news that you are to proceed with the cull.

However, I do wish to tell you how I feel about the statement attributed to yourself in The Press And Journal, Tuesday 2nd March.

Councillor Aileen Malone, the committee convener, said the council could not afford the bill. “We have been inundated with e-mails regarding this,” she said. “I think I have had about 50 e-mails, although only about one was from Aberdeen, and I think another from Aberdeenshire. The rest were from America, Canada and Italy“.

What did you mean by the phrase ‘about one’ ? More than one? Less than one? How many exactly?

So why even comment on the geographical demographic breakdown of those who contacted you when you have not sought to secure sufficient information to facilitate even a reasonably accurate estimate?

In responding to comments, your colleague Neil Fletcher asked myself and others to supply our address to establish whether or not we were ‘constituents’. Perhaps he may wish to share his findings with you – Such information having been gathered, I assumed that this would have been made known at the meeting.

It is apparent to many Aberdonians that the Council tend to experience difficulty when it comes to accounting, but surely from a mere ‘about 50’ emails it is possible to collect figures which would be ‘about’ right. Now if I were Councillor Dean, I would attempt to bolster that number of ‘about 50’ with the number of people I know who ‘nearly’ wrote to you, but I am not prepared to risk credibility over such a silly tactic.

Cllr. Malone, I know for a fact that more than ‘about one’ person in Aberdeen, and more than ‘another’ in Aberdeenshire contacted you with their concerns, and none of these people were asked where they resided.

You are quite entitled to disagree with input from citizens, but because you disagree does not make their contribution, and their status as Aberdeen citizens, any less valid. By your statement you have not only misrepresented a number of citizens, but you have dismissed them to the point as to send out the message that they don’t exist.

All too often, councillors have given statements which deliberately underestimate the strength and number of opposition to certain proposals, and to further belittle their cause, compare this number with a chosen majority, often – as with Loirston – the entire population of a given area, in order to put the opposition into ‘perspective’.

The fact that such a population includes babies and children, people who are unable to respond for a variety of reasons, people who don’t know, don’t care, or have no strong opinion one way or another, is rarely pointed out.

Dismissing respondents, whether for or against, in this way sends out the message that we are governed by the ‘know bests’ on behalf of the ‘don’t cares’ – and your statement as published performs this function  beautifully.

Furthermore, the dismissal of those who have taken the trouble to contribute to the debate reinforces that ‘why bother’ mentality which serves to maintain the numbers in the ‘don’t care’ camp, and the less who bother, the easier it becomes for councillors to get on with the work that the majority don’t care about. If this is how you wish the value of your position to be perceived, then carry on, you’re ‘playing a blinder’.

However, there are others who see it differently.

Cllr. Malone, that many citizens don’t care about many issues, or don’t see any point in participating in debate until it concerns them personally is understandable, perhaps even acceptable.

But for an elected representative such as yourself to care so little for citizens that you, whether out of ignorance or negligence, allow a statement to appear in the media which certainly seems like nothing other than a lie, and a lie which not only fails to represent citizens, but takes them completely out of the equation, is deplorable.

Please find below a list of people living in Aberdeen/shire whom, in addition to myself, I know to have contacted you regarding the deer cull issue.

( List of names and part addresses of 6 persons from Aberdeen, and 4 from Aberdeenshire included in the letter to Cllr. Malone and the other councillors involved in the deer cull issue )

I suggest you review  those ‘about 50’ emails with a view to establishing whether there are any more to add to this list, and issue an apology to every ‘about’ one of them.

I also believe it would be a responsible gesture if you were to contact Aberdeen Journals and ask if they could publish a retraction of your ill founded and outrageous statement.