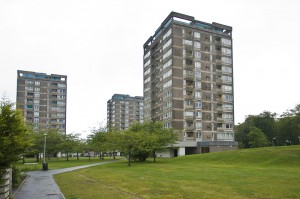 The tower blocks at Hazlehead

An Aberdeen pensioner reports what she considers a massive failure in the provision of services for the elderly and ill.
Greta Young, 72, lives in the Hazlehead area of the city.  Over the past year she has suffered three falls, each of which has caused fractured bones.  After her first fall she was diagnosed with osteoporosis.  Unfortunately, she fell again on Friday 4 March 2010 dislocating her elbow – and within twelve hours fell again – in the early hours of Saturday morning having risen to go to the bathroom. This last accident was, Greta says, by far the most frightening, as she lay on the floor in the hall from 2 a.m. for hours screaming for help before a neighbour broke down her door.  Early the following week a Care Manager visited and suggested she get a Community Alarm which the pensioner welcomed, though no-one could have imagined just how long it would take!

Since early March, she has been terrified in her own home, frightened she might fall again and lie unaided.  Mrs Young says “ I make my way around my flat very slowly and fearfully”.  After weeks and weeks of anxious waiting, Greta contacted her Care Manager to ensure that she was fully aware of the delay. She was assured that she would get an alarm “eventually”.  She then contacted her local Councillor, who said she would look into the matter.  It was only then, that it became clear just how bad the situation was.  It was reported that there had been a long-term sickness absence within that department, and there was a backlog of people waiting for a Community Alarm.

As the weeks became months and still no alarm, Greta felt that Councillors should be alerted to the fact that the elderly, disabled and ill in Aberdeen were suffering in this way so she contacted both local and senior councillors in the local Coalition.  It was important to her that they become aware of how vitally staff absence can impact on the care and wellbeing of the vulnerable.  On 21 May 2010, after waiting for more than two months, a Care Alarm was fitted in her council flat, which greatly relieved her concerns.  Nevertheless, others are still waiting, care is being compromised and vulnerable voices are not being heard.  Greta has vowed to continue raising this issue.