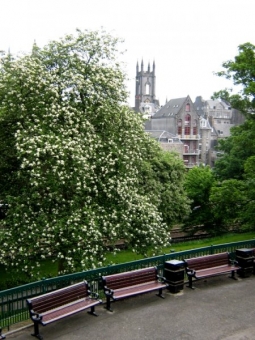 Teams of designers will initially be asked to register an interest in the project by 13th June.
A shortlist of 5 – 7 designers will then be picked to produce seven designs, with the city square board and the Council approving the final design in December.

The public will be allowed to ‘scrutinise’ and comment on the designs but not pick them. The Press and Journal reported on Thursday that there has been world-wide interest in the competition.
http://www.pressandjournal.co.uk/Article.aspx/2233305

But, therein lies the problem. The rest of the world is being asked what the centre of Aberdeen should look like – but not the people in the city.

A year ago, we were consulted on whether we wanted a modern city square. We said no with a majority of 1,270; this was ignored.

I have a big problem with a modern city square in the centre of Aberdeen and this concerns the concept of architectural authenticity. This is the idea that a building or feature should harmonise with its location. The concept is easy to explain using our city. The Victorian Union Terrace Gardens is in harmony with the old granite buildings that surround it, whereas the 1960’s St Nicholas House is obviously out of place in the Granite City. The problem is even recognised in the current Aberdeen local plan:

“The standard of design in new development has been raised as a widespread cause for concern during the preparation of this Local Plan. This is one reason why new development can raise so much hostility amongst the public and this situation must change. The City has such a rich and relatively intact heritage of older buildings that shortcomings of newer ones are all the more obvious.”
http://www.aberdeencity.gov.uk/nmsruntime/saveasdialog.asp?lID=17124&sID=4209

It is possible to produce modern buildings with architectural authenticity in sensitive locations; Elphinstone Hall built next to Kings College in 1930 is a good example. 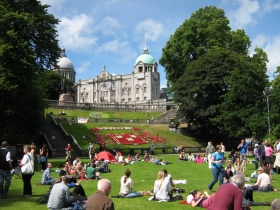 A modern city square in the centre of Aberdeen would not be architecturally authentic and would be jarringly out of place with the older buildings.

It would totally change the character of the city centre and would probably accelerate the current trend whereby there has been piecemeal destruction of old granite buildings to be replaced by soulless modern buildings. This could be exacerbated if TIF funding is approved for a £70m loan.

This loan has to be paid back by capturing new or extra business rates and encouraging new city centre developments would be the main mechanism by which this could happen.

I was born and brought up in Aberdeen and I am intensely proud of the city. It is the granite buildings and the distinctive architecture that bring such a strong sense of locality and identity.

Once Aberdeen’s heritage starts to disappear on a large scale, the city will lose its unique character and will start to look like everywhere else. We will be denied our unique sense of belonging as Aberdonians.

We will not be given a public referendum on the city square. As it stands, a modern city square is being imposed on us whether we like it or not. We do not have to react to this in a “whatever will be, will be” mood of resignation. We can make sure that our voice is heard!

Join the Friends of Union Terrace Gardens on  www.friendsofutg.org