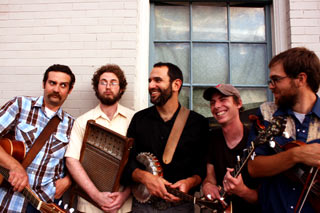 The Hot Seats tour Scotland for the sixth time.

A band that has appeared at just about every major festival in the UK, Virginian livewires The Hot Seats, return to tour Scotland for the sixth time, says Brookfield Knights promoter Loudon Temple.

After gracing Gateshead’s Summertyne Americana Festival, Scottish fans will get the chance to hear blistering material from their brand new album, officially released to coincide with their arrival.

They picked up a Herald Angel, the biggest accolade possible from Edinburgh, for their outstanding contribution during a sell-out run at The Spiegeltent.

They were hailed as one of the outstanding acts at last year’s Shetland Folk Festival, winning attention with their fiery brand of blistering Appalachian old-time mixed with left-of-centre bluegrass and a sprinkling of their own compositions.

Frontman Josh Bearman, a multi-instrumentalist, like several of his sidekicks, said they were delighted to be heading back to NE Scotland where they are no strangers.

“It’s great to play on the big festival stages, but we love it too, whenever we get a chance to take our music into the more intimate performance spaces,” he said,“We’re playing at three UK festivals this year, as well as returning to some smaller clubs and halls, so the balance is just how we like it.”

The band started out fine-tuning their skills on the redneck bars and college clubs circuit where they experimented with a suitcase-full of assorted toys to supplement the guitar/mandolin/banjo/fiddle/bass line-up, employing everything from jawharp to washboard, tin can percussion and vintage trap-kit drum set.

Their original music is simultaneously hard to classify and is instantly identifiable, combining the virtuosic soloing and tightness of bluegrass, the band-driven rhythm of old time, the jerky bounce of ragtime, and the swagger of good old rock and roll.

According to the critics…