With thanks to Kirsty Young. 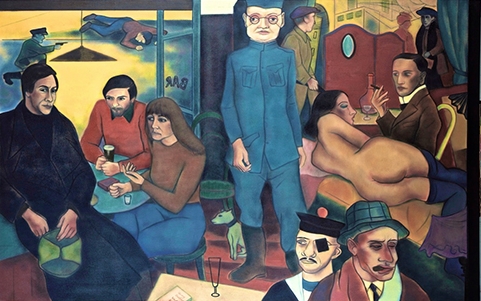 Aberdeen’s first exhibition of paintings and other works by major Scottish artist Alexander Moffat opens at Peacock Visual Arts next month (Exhibition opening on Friday 15 August 2014, 6 – 8pm).
Paintings as Arguments: Five Decades of Cultural and Political Change in Scotland, which runs 16 August – 20 September 2014, will question the role of art and culture in the independence debate.

The project opens enquiries into important changes and achievements in cultural expression and education, artistic means of production and dissemination in Scotland and their international contexts.

Moffat, an artist-activist opposed to establishment conventions, played a major role in the cultural changes sweeping Scotland and the world from the 1960s onwards. His main aim as an artist, curator, teacher and writer has been to place Scotland and Scottish art in a relationship with the rest of the world.

As the country prepares to answer the question of whether it wants self-government or not, Peacock Visual Arts asks what contribution have the visual arts made in taking us to the point where a referendum on independence is even thinkable, no matter the outcome.

What has been the role of the “success story” of Scottish art in increasing self-awareness of Scotland’s cultural distinctiveness? What are the cultural arguments for, or against, independence?

The exhibition will contain a number of large-scale oil paintings from both private and national collections. It will also showcase documentary material from the last five decades, including books, magazines and photographs.

An evening of debate, followed by music from the renowned composer, musicologist, and music historian John Purser, will allow audiences to voice their opinions and to learn more about the exhibition and its contents from Moffat and Alan Riach, Professor of Scottish Literature at the University of Glasgow (Wednesday 17 September 2014, 6:30pm at Peacock Visual Arts).

Peacock is publishing a book, a conversation between Moffat and Riach, which illuminates many of the major cultural changes that have taken place over the past half-century. This will be available to buy once the exhibition has opened its doors on Friday 16 August 2014 at 6pm.