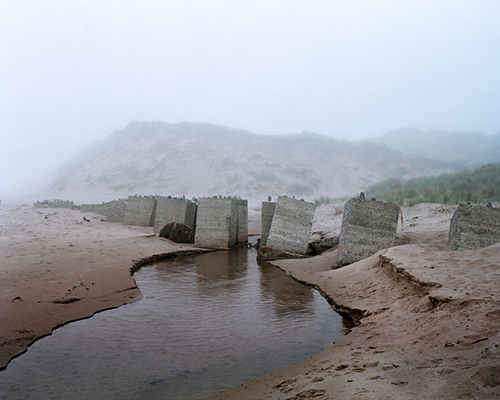 Terry O’Neill Award winner Marc Wilson is bringing his stunning series of photographs ‘The Last Stand’ to Peacock Visual Arts in Aberdeen. The exhibition will open to the public on Friday 28 March 2014 at 6pm.

So far 53 of the 80 images in the series have been photographed, focusing on military defence structures that remain and their place in the shifting landscape that surrounds them.

Over the years many of the wartime defence locations have disappeared from view, either subsumed or submerged by the changing sands and waters or by more human intervention. At the same time others have re-emerged from their shrouds.

Marc has so far travelled over 15,000 miles to 109 locations to capture these images along the coastlines of the UK, The Channel Islands, Northern France and Belgium. He has recently spent 8 days photographing in Orkney and Shetland and is soon to visit the Western coast of France down to the Spanish border, Holland, Denmark, and Norway.

This poignant exhibition at Peacock Visual Arts follows on from shows at The Anise Gallery, London and The Royal Armouries Museum in Leeds. The work has been featured on BBC online, TV and Radio and The Guardian.

The objects and zones of defence Wilson photographs serve as ‘a visual marker to the shadows of conflict’ (Wayne Ford) and are as such an important part of the fabric of our recent histories and memories.

Over the intervening years some of these ‘markers’ have been lost to the passage of time and shifting sands. Very recently on the Northern coast of France, at Wissant, the vast wartime defences were pulled apart and removed by the authorities. Marc was lucky to have photographed these defences last year but today there is nothing but the sand and tides in this place. No physical reminder of the past remains.

Yet at the same time in late 2013 some defences along the coast of the UK have re-emerged from the dunes after an extreme storm. These defences, although often submerged by waters or subsumed by sands are never really lost to us.

The exhibition at Peacock Visual Arts in Aberdeen will show a selection of 22 images from the series, including those from locations in Scotland, The Northern Isles, Northern France and England.