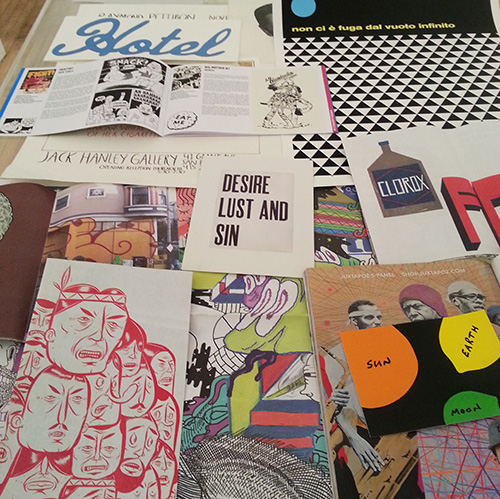 The exhibition has been organised in collaboration with Aberdeen collective WLDWLVS.
The works included in the exhibition all use text and typography in some way; these include pieces by local artists Brian Ross, John Mackenzie and Neil Henderson amongst others, such as a large-scale mural commissioned for the show.

This work will be shown alongside that of established international artists Adam Bridgland, Chu, Scott Myles and many more.

It will bring together a rich variety of styles and disciplines from printmaking to graffiti.

The title, #SEENINTHEDEEN, was a quick method for WLDWLVS to start documenting the hidden side of Aberdeen that people could otherwise miss.

The inspiration originally came from graffiti, paste-ups and stickers posted around the city, however the hashtag has taken on a life of its own. It’s another way of looking at the city – these are images that won’t be found in the guidebooks but that show a truer representation of the city.

The exhibition invites contributions from residents and visitors of Aberdeen using social networking platforms Twitter and Instagram. Images of street photography from shop signs to graffiti, and everything else in-between, taken and tagged with #SEENINTHEDEEN will be displayed on the website www.seeninthedeen.com, which will itself appear in the exhibition.

“we’re continually surprised by the gems people find around the city and we love the range of images presented; from the serious to the absurd. It was always our intention to bring the work together at some point and when the opportunity to partner with Peacock Visual Arts came around it just felt like a natural fit.”

The opening is sponsored by anCnoc and BrewDog and runs from 23rd november to 21st December.