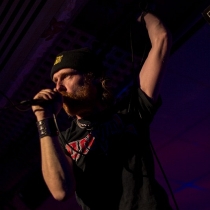 Heavy metal and straight up rock and roll were par for course at Downstairs, below Malt Mill. Andrew Watson recounts the night’s proceedings.

Even though, arguably, there were no more than two different genres on show; it was testament to the talent of the bands playing, and the intricate nuances of rock music, that it never got boring.

White Wasted Virgin were the opening support act, and really could’ve been further up the roster if it weren’t for their relatively infancy.

They certainly didn’t play like a band that had only played live twice before. They were really groovy, but had an alternative grungy edge to them like Alice in Chains.

Moving on, Red Command was a one man band powerhouse. He could growl ferociously, and gave the impression, at least when he was singing, that you wouldn’t want to meet him down a dark alley. The only thing I would say was that his backing track sometimes overwhelmed his guitar playing. Not so much to hide potential ineptitude, but to mask his expert playing; which was a real shame.

Bisongrass, the closing support act, were a mix of groove metal and the, sometimes the much maligned, stoner rock. I would say they were much like Kyuss.

Last up, Bacchus Baracus were intriguing, primarily because their singer was also the drummer. That’s where the comparisons to Phil Collins end, though. They were more like Queens of the Stone Age. Their finale was a spectacular twin guitar riff in unison with the rhythm section. They even provided a semi naked guitarist for the pleasure of the ladies in the crowd.

Everything ran smoothly throughout the duration of the night. There was never too long to wait as each band finished and the next began. Every song was a foot stomper. It was an enjoyable evening.