Compiled by Fred Wilkinson with thanks to Jani Lang.

The Jani Lang Band return to their ‘native home’ to deliver an extraordinary evening of music and dances from Hungary, Transylvania and beyond! The band will be appearing at The Blue Lamp on Saturday 6th November. 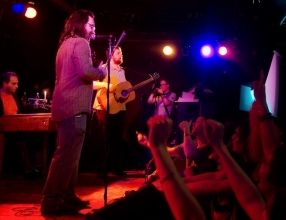 A táncház, meaning dance house, is the Hungarian ceilidh where people gather to enjoy, dance or learn traditional dances and music.

Jani Lang is a Hungarian fiddle player who is joined by some of the finest musicians from Scotland and Hungary to form the Jani Lang Band.

The Band was founded in Aberdeen Scotland in 2006 by Jani Lang, who moved there in 2005 after touring for many years with different bands and musicians. In Aberdeen local music sessions provided the starting point for a magical mixture of musical influences and talent.

The Jani Lang Band was born, creating a unique collaboration of Hungarian, Scottish, Irish and Egyptian musicians driven by an enthusiasm for Balkan and Gypsy music. This has developed into a shared passion and cultivated a deeper understanding of culture, language and the music.

On their Devil in A Box album they were joined by two of the most sought after musicians from Hungary, a rising star of the Gypsy music scene, singer-guitar player Guszti Balogh and the world famous cimbalom player, Kalman Balogh. The title Devil in a Box comes from a traditional Gypsy song which says: “If I catch the devil, I lock him in a box and the more he moves the more I hit the box”

Over the years they have stunned audiences at most of the Scottish folk festivals, such as the Shetland Folk Festival, Orkney Folk Festival, Edinburgh Fringe, Scots Fiddle Festival, etc. Their táncház will start with a performance of music followed by a ceilidh of Hungarian and Transylvanian dances led by a professional dancer from Hungary.

Come along to experience a real Hungarian ceilidh and dance the night away with the band!