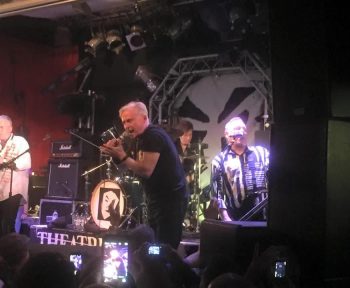 Legendary 1980s band Theatre of Hate will release its first album in some 30 years on 14  October.
Theatre of Hate were formed in the 1980s, but only recently reformed to tour. Original members Stan Stammers (bass) and John Leonard (saxophone) will join Brandon in the current line-up which will be at Krakatoa on 4 November.

The album ‘Kinshi’ (from the Japanese meaning roughy ‘forbidden’) is being crowd funded and offers a wide range of incentives to those who donate to the project and preorder the album which will be available on several formats including vinyl.

Details can be found here: http://www.pledgemusic.com/projects/theatre-of-hate

Vive Le Rock has awarded the album 9/10 in a full page review with a headline that reads:

and goes on to conclude

“Kinshi is the sound of a band who have grown and developed, but never lost sight of what brought them together. It’s intensity and sense of purpose is relentless and it demands attention, but then Theatre of Hate was never meant to be back-ground noise and that’s why so many years on, it’s so good to have them back”

There are a whole host of Pre-Order goodies to be had when getting your hands on a copy of ‘Kinshi’, from Gold Dinner Packages to Double Vinyl versions to

Download only editions. And remember ALL Pre-Orderer’s will receive a download of ‘Kinshi’ direct into their inbox on the release day morning FRIDAY 14TH OCTOBER 2016.

We have not One but Two Pre-Order sites for you to peruse:

The full ‘Kinshi’ Tour is selling well. Advance tickets can be found here:

Those who have pre-ordered are receiving updates, videos and mp3s.