One of my more volatile investigations published in Aberdeen Voice concerns Northfield Animal Haven. One of its former Facebook page administrators, Fiona Manclark, persistently posted defamatory comments about me across social media sites – and later claimed a hacker had got into her Twitter, Facebook and email accounts and made the remarks, not her.

Refusing to delete these comments – that I was an ‘alkie’ and a liar’ – and failing to submit any evidence to back these slanderous claims, Fiona Manclark dared me on several occasions to sue her. So eventually I did. And by default, I’ve prevailed. I won’t get the requested apology as it was a default situation. But the court has awarded damages to me.

Don’t feel too sorry for her: she was given numerous chances to delete the material and to apologise, all of which she refused to do over the months – but the upshot is she is to pay me £10,000 plus costs (currently being determined).

Here’s how things built up, what happened, and in a series of articles, I will lay bare the story behind the legal action, expose more concerns about NAH, and share my thoughts at having to stop writing about NAH or Manclark while the legal action was live. By Suzanne Kelly. 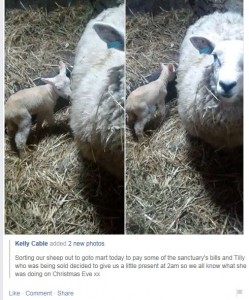 Fiona Manclark was an administrator for Northfield Animal Haven’s Facebook page. I was investigating NAH; this came about after a relatively innocuous article, ‘Reputable Animal Charities Initiative’ was published in early June 2015,

The piece stemmed from a press release; the Press & Journal ran the same story.

It was merely a call for standards in the animal rescue/welfare sector – a charity sector in which more than a few scams take place.

By this time, I had heard distant rumblings about Northfield Animal Haven and the family operating it.

The response to the article from Fiona Manclark’s email was this:

“I find it disgusting and absolutely shocking at how biased this paper is. I seen the remarks that your so called journalist made on one of the animal sanctuary sites, and it was disgusting. The woman that runs the sanctuary that is so very obviously being spoken about here, works very hard and does it all herself.

“Your (so called) journalist was invited up on more than one occasion. But she never turned up at all. So how she has the audacity to speak about sanctuaries this way, without knowing the facts is not only slander, but is very very poor journalism. I can only assume that she couldn’t find the time to leave the brewdog beer for long enough.

“I really really hope that some of the sanctuaries get together and sue this paper.”

“[This comment is being published in full, in spite of obvious and valid reasons why some content contravenes publication criteria, as it has been published in full on a public facebook page. Therefore it appears futile to edit – Moderator]”

I had been asking Northfield (NAH) questions by this point – but they had NOT been mentioned in the article.

It was Fiona’s bringing NAH into the context of the article that sparked off a small flood of people making contact with me.

People with past dealings with NAH or its owner Kelly Cable and/or her father Eric shared concerns about animal welfare, how funds are managed, what goes on at the farm, Cable’s past conviction for benefit fraud, and other allegations. Almost all of the concerns came from people who were fearful of the Cables discovering the source’s identity.

Considering that Eric Cable chose to mention an AK47 on a Facebook post concerning my articles, I fully understand the fear that some of my sources have.

People chose to come to me with their evidence and anecdotes; if they had been convinced by the repetitive assertions I was a liar and an alcoholic, they well might have gone to other writers instead, or not come forward at all. Manclark/the alleged hacker – if unchallenged — would have damaged my reputation personally and professionally; this will be touched on in a future piece. I asked Manclark numerous times to take down her derogatory remarks. She – or this alleged hacker – refused.

What were some of the issues I found? Northfield Animal Haven claimed to ‘rescue all farm animals’ – it had for instance a sign showing a variety of farm animals, which declared it rescued all farm animals. In reality, while one arm of this family business purports to rescue farm animals; the other arm sells farm animals at market.

Some animal lovers were horrified when they discovered they were supporting a person who was involved in rescue but who was also involved in sending animals to market – which more often than not can mean sending them to slaughter.

Kelly Cable responded along the lines that ‘everyone’ knows that she also operates a ‘working farm’ and it is not her concern what happens to animals she sells (more on these issues in further articles in this series).

When questioned in detail about whether or not the sold animals are killed she replied:

Northfield was, shall we say, creative with fundraising. Using photos of Shetland ponies and emaciated cows, NAH claimed to need funds for urgent rescue and launched online fundraising appeals. When these images were put into Google search by Aberdeen Voice and other concerned parties, it emerged either the ponies depicted were happily homed and had no connection to Northfield – or in the case of the cows – were in… America.

Cable claimed to be rescuing them:

The truth was just a bit different back in 2011 when Lycospca (based in Lycoming County, USA) wrote about the same animals:

“Thank goodness someone saw these poor animals and called us to check up on them. The owner had grain in the barn and they were ordered to get a round bale.”

If the casual observer had read Kelly’s messages about the cows, they’d have believed she had just seen them, and that they had little time in which to raise funds. As for the shetland ponies, owners of two of these were less than pleased to find their photos had been used for NAH fundraising without their permission.

There will be further analysis and revelations in the next articles.

If Fiona Manclark had been hacked, the hack went on for six months. She would also appear not to have taken down any of the offensive comments the alleged hacker made over the months until late December when my legal action against her attempted smear on me was in progress.

The alleged hacker managed to get her Facebook, Twitter and email accounts and use them to communicate with people including her friends – none of which picked up on the claim Manclark made that she didn’t know me or AV, or that they weren’t speaking to Manclark but to a hacker.

Aberdeen Voice has also seen Facebook discussions between Ms Manclark and others in which Manclark mentions the threat of legal action from me, and complains I sent her a profusion of private messages.

The truth is that I sent one message to her, asking her to remove offensive comments; an Aberdeen Voice editor was on copy of the message. Fiona Manclark (or this mysterious hacker) replied refusing to retract the comments. None of the people in these discussions suspected that they were communicating with a hacker; none question Manclark’s assertion to the court that she’d only heard of me/Aberdeen Voice after hearing from my lawyer.

When someone is hacked, there is every chance that their email/social media provider will at the very least send a message of concern – login from an unusual site, unusual activity on the account, etc.

When items sent or posted from a hacker haven’t been deleted, then a hacking victim would see them in their outbox, on their home page, in their twitter feed, etc. – and know something was amiss, delete them and report a suspected hack. None of this seems to fit the pattern we are asked by Manclark to believe.

The hack allegedly went on from June through December – apparently without Manclark realising it was taking place. Sometimes the alleged hacker was able to respond very quickly (see Aberdeen Voice comments for instance).

Ms Manclark recently claimed to the court that she gave all of her passwords to Kelly Cable at Northfield Animal Haven: if there were a hack, and if the police had been asked to investigate by Manclark, I wonder where the trail would have led – to some mysterious hacker, or a computer closer to home?

Then again, should we take Manclark’s word there was a hacker over this period of time using three of her accounts?

Was there a mysterious hacker with a vendetta against me with regard to Northfield that took place for months – or was this all the work of Fiona Manclark?

Fiona Manclark refused my lawyer’s first request to remove the posts from social media and apologise publically for them. When she refused, we started the legal action against her. After months of waiting to see if she would get legal aid to fight the case, legal aid was denied, and a court date was set.

Manclark wrote a letter to the court rather than appearing before it in August. In her letter she sticks to the claim she had been hacked. She claims it was reported to the police, but she never supplied evidence to back this up such as a police incident number.

She refused to help me have the police investigate the hacking claim. I was a third party victim of the hack she claims to have suffered.

The police could have investigated it – only if Manclark had been willing to co-operate. My lawyer wanted her to go to the police with me to report it, and she refused on the grounds ‘she didn’t know me’. Well, the person using her accounts certainly knew me well enough – to respond by blocking me.

It would appear from the legal decision in my favour the courts might have at the very least had their doubts as to her claims.

Manclark had quite a bit to say in her written submission to the court, which Aberdeen Voice editors have now seen. This will be the subject of the next article.

It is my understanding now that the court’s decision is absolute. It is time for Ms Manclark – or the mysterious hacker – to think about making restitution to me. My thoughts on the defamation, the legal process, and Ms Manclark’s arguments (such as they are) will be one of the articles in this series.