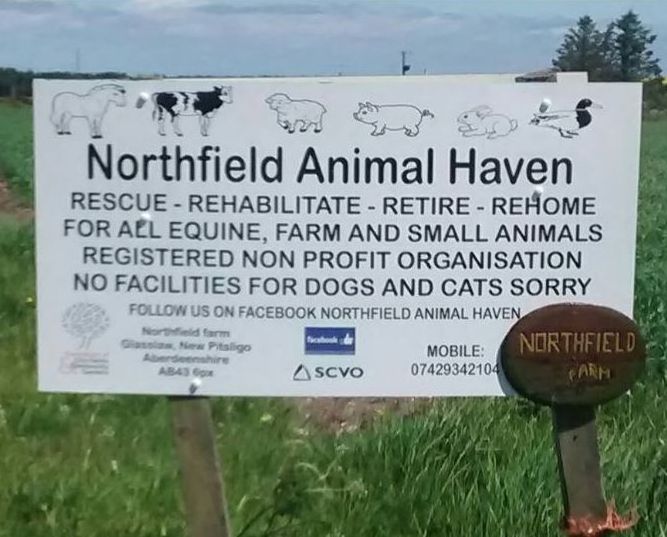 A sign for the organisation depicts a wide range of animals including sheep.

What the sign and many fundraising websites didn’t make clear was that Cable also wears a very different hat: she makes money from other farm animals – selling them at auction where they are likely to end up on plates, not in rescue pens.

Websites which initially sought donations for Northfield to save farm animals now have long explanations from the Cables as to their other business. Long, rambling posts by Cable attempt to justify why they save some animals and sell off others at market. Much of this newly-added prose is down to a recent article in Aberdeen Voice.

The article clarified Kelly Cable’s method of doing business: funds from the animals sold at market are used to support the animals they choose to save.

Despite images of sheep clearly shown on Northfield’s various rescue appeals, the Cables are now adamant they don’t save sheep. Those who look at the pictures and read the initial posts were hardly likely to know that.

On a social media page for the Haven, Cable claimed ‘everyone’ knows about the working farm side of the business. As to using photographs of animals destined for slaughter, not sanctuary, Cable offers this explanation:

“The only reason we post pics of the sheep/cows etc. is because we’ve been asked to. Some of the people who donate and live far away love seeing pictures of all the animals.”

The assertion that people who donate to save animals also want to see photos of the cow destined to become steak and the lamb that’s for the chop is an odd one.

When questioned in detail about whether or not the sold animals are killed she replied:

The interest in Cable’s working farm and rescue operations were sparked by her online Go Fund Me page asking for £5,000 to rescue Shetland ponies. Two other area animal shelters came forward ready to rescue the animals without raising the £5,000 for the purpose. These were turned away by Cable, who wrote of a ‘vendetta’ and said the ponies’ owner only wanted Cable to get the animals.

The owner of the Shetlands is unknown at present. The ‘vendetta’ referred to seems to be nothing more than a voluntary regulatory body, REACH, being formed to provide a code of ethics for animal rescue. The Cable school of thought falls far short of this ideology, which says breeding animals is wrong for anyone in the rescue business, as is selling animals, especially for slaughter.

One donor who discovered that the Cables also raise lambs and other animals to sell at local auction market (Thainstone’s) commented:

“Disappointed an ‘animal haven’ sends animals to slaughter. Did you read their reply re. refusing help from Hillside? Sounds odd to me.”

Unhappy donors who learned of the sales, concerned animal welfare organisations, and people who have had past dealings with Cable came forward with serious concerns on her business model and details of a decidedly sketchy financial past.

The Haven is a voluntary organisation, and as such there is little visibility of the organisation’s structure or finance. Transparency, honesty, and clarity are what many potential donors expect of those they support. Potential Northfield donors might be interested to know that Cable was made bankrupt in 2009. Not all of her creditors were paid.

However, when it comes to transparency and honesty, one particular episode in Kelly Cable’s colourful career stands out. She and a former partner were lent £10,000 with which to buy a home together. This money came from her partner’s parents and his pensioner grandparents. The couple each signed a loan agreement for the money in August of 2000. The couple split up after buying the Aberdeenshire home.

When asked to repay her £5,000 share of this loan, Kelly Cable astonishingly tried to claim she had never received the money – claiming the signature on the handwritten loan and repayment agreement were not hers.

A forensic handwriting expert put paid to that claim by examining the document and samples of Cable’s writing. The expert concluded the writing was by the same person, or as the report put it, there were:

It is understood that fundraising regulatory authorities are interested in Northfield’s fundraising activities.

Northfield have announced on social media that they are seeking legal advice concerning Aberdeen Voice’s article by Suzanne Kelly, which can be found here https://aberdeenvoice.com/2015/08/controversial-animal-organisation-declines-pony-rescue-offers/

It is strongly recommended that anyone who wants to donate money to an animal rescue or any other charity should research it thoroughly beforehand, and not rely solely on pictures and testimonials written by the operators.

25 Responses to “Animal Shelter Operator Is A Smooth Operator”