Embattled Northfield Animal Haven is using photographs to fundraise. There is nothing wrong with that – except that the photos of animals purportedly in dire straits were taken from other organisations without permission – and most animals shown were already saved. Aberdeen Voice reveals another deception. By Suzanne Kelly.

It’s a case of the old ‘Spot the Difference’ game: only there is no difference in the photos.

Pictured right is the GoFundMe page for Northfield Animal Haven that currently has many people worried for the future of six Shetland ponies. Generous people chipped in what they could.

What hard-hearted person could resist this fluffy white pony? 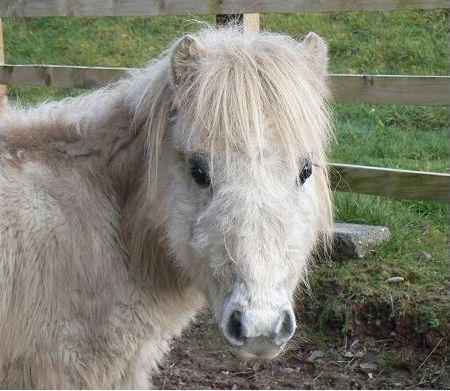 Gooseberry was a colt; perhaps he’s had a sex change and a few foals before needing a Northfield rescue.

Under the misappropriated photo of Gooseberry, Cable has written:

“Have spoke [sic] with the lady today who has the Shetland Ponies safe for us until they come here. Weather permitting it should be this week, cant wait to meet them and give them a new home when they are ready. Thank you to all who has [sic] donated towards getting them here. Hopefully once they are here, people will see that there is no scam going on.”

As far as a ‘scam’ goes, it will be interesting to see which Shetlands, if any, turn up rescued at Northfield.

As for Gooseberry? According to Lluest Horse and Pony Trust website, as recently as July 14:

“Gooseberry has now been successfully re-homed with his best friend Santa.”

Aberdeen Voice confirmed with Lluest Horse and Pony trust the photo was their rescue, it is safely homed, and no permission had been sought to use their image to fundraise for Northfield. It is clear that the photo Northfield used is that of a colt rescued by others, and as such is misleading.

There is nothing on the Northfield GoFundMe page to suggest that this photo is used for illustration purposes only.

Any animal lover would look at this GoFundMe appeal and have no idea that this pony illustrated is not one of the animals allegedly to be.

Any animal lover who saw the initial Northfield appeal post might have been confused or misled on a few other points as well. Kelly Cable refers to the rescues happening on a working farm. A working farm could be any kind of venture – arable crops, herbs, flowers. No one would automatically know that this meant some animals were raised to be sold to fund rescuing others – a moral dilemma if ever there were one.

Lambs to the Slaughter:

Perhaps Northfield should start by rescuing their own sheep, as they do indicate they rescue ‘all farm animals’.

While selling its own animals at Aberdeenshire’s Thainstone market, Northfield wanted to save the ponies which it claimed were:

“under threat of being shot and used over winter as dog food.”

When their non-rescues end up as meat, this dire warning rings a bit hollow.

Aberdeen Voice published the revelation about the sale of animals at market. Following the article, Cable issued a number of entries on the GoFundMe page which admit the marketing of some animals. These posts by Cable represent that millions of sheep are slaughtered. None of what she says satisfactorily explains why Northfield shows pictures of sheep on its sign and other fundraising sites if they don’t normally save sheep.

Their answer when questioned on this point was that ‘people like to see pictures of all the animals’.

Aberdeen Voice spoke to another animal owner whose pony was depicted as needing a rescue. The owner had no idea this photo had been copied and used for fundraising.

The owner confirms that the photo was taken from the internet and reused by Cable without any permission or prior contact. The owner is happy to advise Aberdeen Voice readers the animal in question is in fine health, and is pregnant in fact. The animal’s owner is contemplating a variety of actions, and is less than happy to find her photo misappropriated by Cable.

While Cable may be happy to sell some cows for meat, she’s into rescuing other cattle. 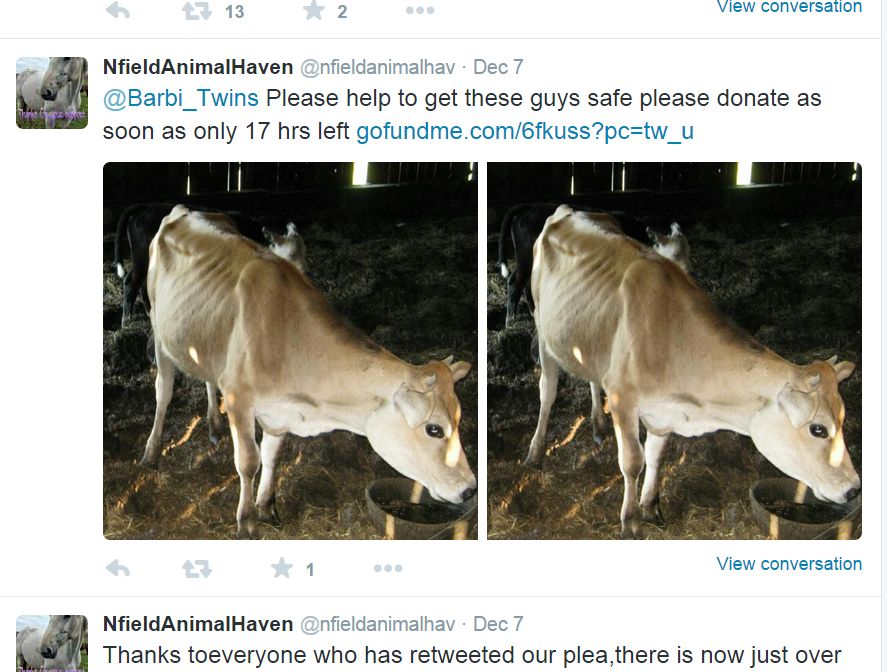 Take these for instance. According to Northfield Animal Haven’s twitter page, they only had 17 hours (for some reason). 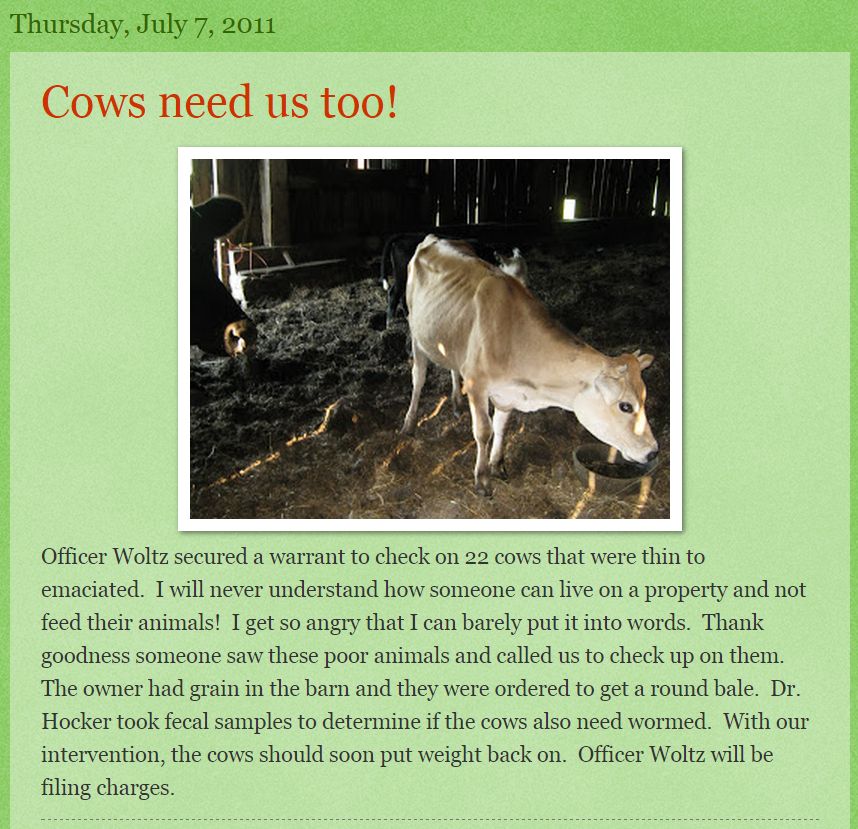 The truth was just a bit different back in 2011 when Lycospca (based in Lycoming County, USA) wrote about the same animals:

“Thank goodness someone saw these poor animals and called us to check up on them. The owner had grain in the barn and they were ordered to get a round bale. Dr. Hocker took fecal samples to determine if the cows also need wormed.

“With our intervention, the cows should soon put weight back on. Officer Woltz will be filing charges.”

However, according to Northfield Animal Haven, these cows are dead. The now closed campaign was continued after the reported death of the animals, and the funds raised put towards the horses.

“RIP to the cows dumped in a shed, I couldn’t save them I tried to get more time and raise enough f… http://www.gofundme.com/6fkuss?pc=tw_u ” – NfieldAnimalHaven – Dec 8, 2014

“We will continue to share this campaign for anyone to donate to any donations will goto the horses… http://www.gofundme.com/6fkuss?pc=tw_u “ – NfieldAnimalHaven – Dec 9, 2014

Aberdeen Voice will be interested to know whether the Scottish SPCA were contacted about these cows.

Coupled with misleading and contradictory statements as to the fundraising activities and 100% dependence on the public (which if they are selling animals to help save others is not quite accurate), these photographs could easily mislead potential donors – some of which were ‘disappointed’ when they learned their money was going to people who send some animals to slaughter. When questioned in detail about whether or not the sold animals are killed she replied:

There are other instances of this photo ‘borrowing’. In this instance the appeal is to save 6 ponies and their babies. 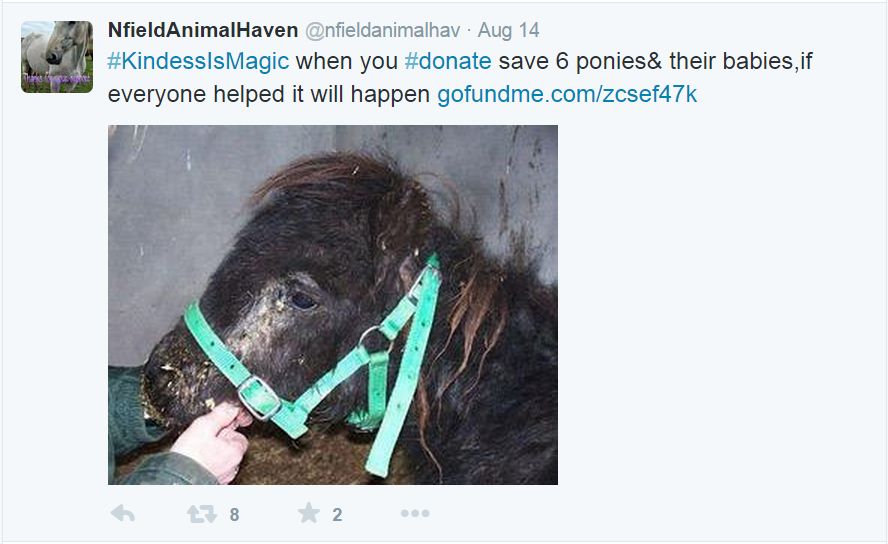 A pony with a weeping eye and green halter is shown. In association with the picture, and that of Gooseberry, Northfield Animal Haven wrote:

“make it a Good #Friday raise enough to get the transport booked to get these babies http://www.gofundme.com/zcsef47k 2392 followers £5 each would do”

Again, the photo is from the internet; in this case from a December 2011 rescue in Ireland. 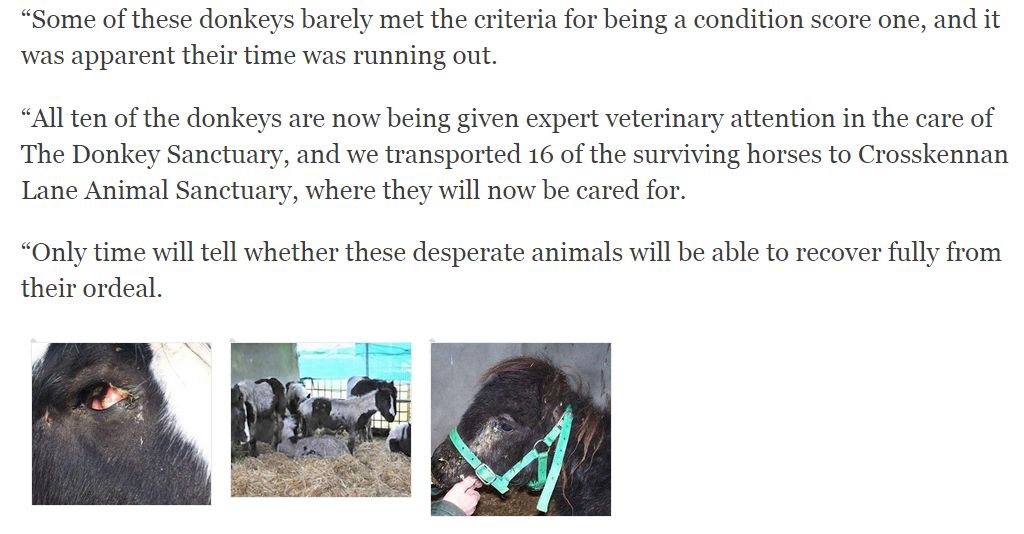 There are many genuine animals needing urgent rescue. There are finite funds available in these financially challenging times for people to donate to good causes. When a person donates to one charity, that means another charity is going to go without.

Appeals must reflect facts. When someone is soliciting for funds, the kind-hearted people who make donations are trusting that they are going to help genuine animals, that they are being told the truth, and they are literally being given the full picture. It is essential that we find out what animals have been rescued by Northfield, and how much they have collected in goods and funds.

If a single person has been misled, that is a person too much.

Kelly Cable has indicated on Facebook and elsewhere that she is receiving threatening phone calls which she reported to the police, and that her lawyers are advising her not to answer questions on Aberdeen Voice. She has also represented that she has a brain tumour.

“Right this stops now, I am sick to the back teeth of this, we have been a rescue now for three years and have never had such hassle since march when Suzanne Kelly first came at us for selling our lambs not rescue animals since then it has been continual from her. I am not registering as a charity but I have done something else which will put all of our supporters at ease, which as soon as it is through it will be posted.

“I don’t know about anyone else but this really is getting beyond a joke now, all the good that we have done is ignored and to goto [sic] to a previous partner from 15 years ago where you will get one side of a story is scraping the barrel.

“I should not have to discuss my personal life or what happened to me in this relationship ie being threatened to be locked away from my family is just one thing so from now on whatever is written in the voice people can believe it or not. I will continue to go down the legal route with regards to the voice.”

The reference to the ‘previous relationship’ refers to the revelations that she promised to repay her ex-partner’s parents and his grand parents a loan the couple were made. Her share was £5,000. She made representations at the time that it was not her signature on the loan agreement. A forensic handwriting expert was called in who concluded that Kelly Cable had in fact signed for the loan.

Aberdeen Voice is not interested in the details of the personal relationship, but a picture is emerging which throws doubt on the trustworthiness and honesty of the woman behind Northfield Animal Sanctuary.

This is a woman who signed for a loan from a partner’s parents and pensioner grandparents and tried to deny she had signed for it, and was shown to be untruthful in that assertion. People have the right to know whether or not those operating a fundraising organisation are trustworthy. An article addressing the issue of how trustworthy Kelly Cable is – or otherwise – is forthcoming.

A dossier of all information collected by Aberdeen Voice to date will be passed to the police. This will include information from a number of people who came forward with anecdotes alleging financial improprieties after the first article was published.

Northfield has the right of reply to this article. Aberdeen Voice has the following questions for Kelly Cable:

*  Where are the six Shetland ponies your current GoFundMe appeal is for?

*  Do the six Shetlands even exist – can we have some actual proof and actual photos?

*  Who is/was their owner – is it someone you know?

*  How do we contact the owner of the Shetlands?

*  Do you accept that the photographs you used in the examples above do not represent the animals you purport to rescue?

*  How many times have you shown photos not of the animals you sought funds to rescue, but of other animals?

* In one case said you ‘managed to get a pic today’ of some cattle to be rescued by you. The picture matches a photograph taken from the internet. How did you manage to get this photograph and were or were you not involved in the rescue?

*  Do you accept that people could have been misled as to what animals they were being asked to donate money towards rescuing?

Aberdeen Voice will continue to watch developments on this story and report.