Aberdeen’s Campaign for Nuclear Disarmament group has held a memorial service marking 66 years since the nuclear attacks on the Japanese cities of Hiroshima and Nagasaki in World War Two. Philip Sim attended the annual event and brings us the following account.

There was a healthy turnout at the event on the banks of the River Dee, where speakers and spectators alike braved the pouring rain and swirling winds.

Hiroshima Memorial on the River Dee from Philip Sim on Vimeo.

Messages of support were read out from Tomihisa Taue, the mayor of Nagasaki, Scottish First Minister Alex Salmond, and Aberdeen North MP Frank Doran. Poems and songs were recited, all conveying the same broad anti-nuclear message.

After a minute’s silence, the group lit two hundred peace lanterns, one for each thousand people killed in the nuclear attacks on Japan in 1945, and floated them down the River Dee as the sun went down. 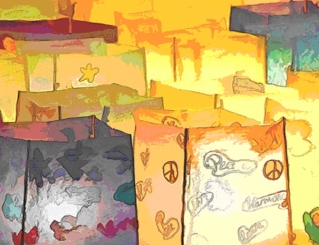