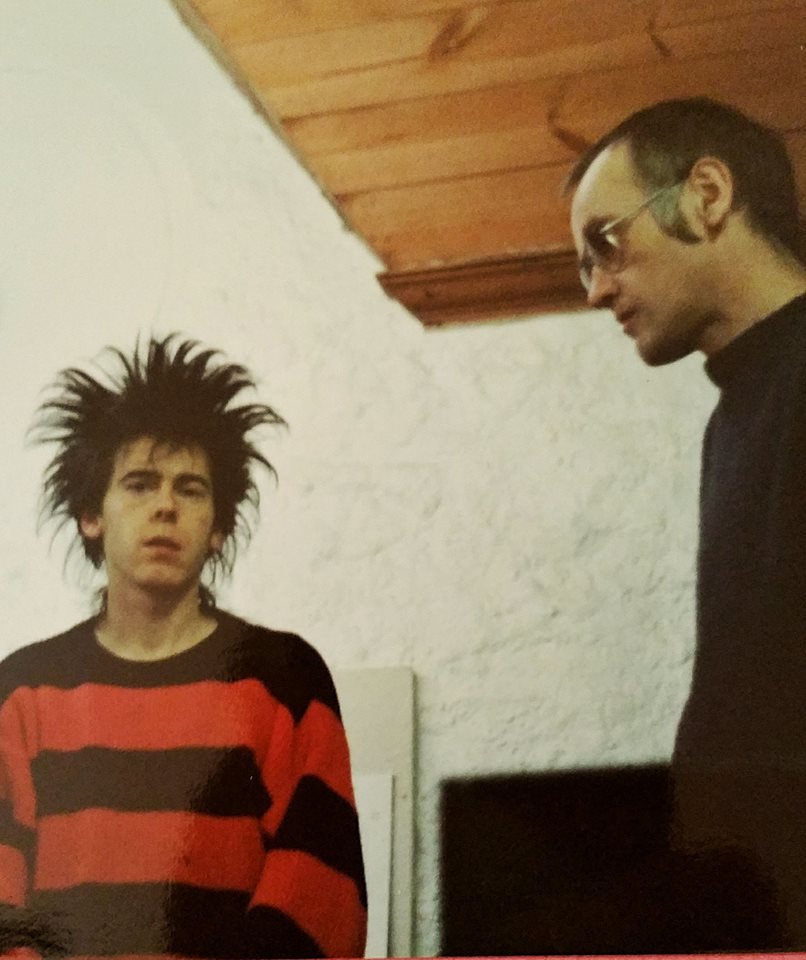 “Aaaah Grasshopper, you still have much to learn … you must first try to listen … and feeeel!”

Once upon a time there was a young man who fancied himself as the rebranded Anarcho Dennis The Menace.

Unfortunately, he did not have the means to put enough calories into his person in order to avoid being laughed and sneered at by the bespectacled Walter and his crew of ‘softies’.

So he developed a defiant, unflinching pose in order to look hard.

He got a punk band together and generally scared the crap out of folk … his relatives mostly,

Then he got a wee job doing sound for a band called Mabel Meldrums Ceilidh Band.

Working alongside his chum, and punk band colleague Frank Benzie, nephew of Mabels’ guitarist and vocalist, Ian F Benzie, the young man in question came to know and refer to the Benzies as ‘Frunk an’ Unc’ – which neither ever objected to.

But their influence on the stoic, stripey one was not only significant, but equal and opposite!

This brought about much confusion. Whilst Frunk would lead young Dennisesque astray, and goad him into strange and perilous situations, Unc would be much more a source of a calm and enlightenment – particularly with regard to the realm of music.

Words of wisdom were dispensed freely:

“If the music is ‘at loud ye canna hear yersel think, then how d’ye ken yer actually listenin tae music?”

“The words ‘I love you’ should be spoken close up, and whispered ….. if ye scream them oot til there’s snotters comin oot yer mou’, yer likely tae get a blind date wi fower or six coppers wi big sticks in the back o’ a van”

And ither such hippy stuff and fluff.

However, it sunk in eventually, to the point that young hardened cynic began to appreciate the understated and the subtle alongside the “in yer face wi a big slab ya ****” aspects of music and art.

But then, not long after, Ian F Benzie, along with Mabels’ bassist/banjo plucker Buzzby McMillan parted company with Sandie Wyles (fiddle/mando/vocs), Andrew MacDonald (keys/concertina/caller) and Ian Wilson (Bodhran/ percussion/whistle), and went on to form the notorious Old Blind Dogs.

Sandie continued playing with a new Mabel Meldrums line up with a very different approach and sound.

As for that defiant, unflinching, skinny, stoic, cynical, spikey, stripey, cartoon character wannabe, tribute act? Well that was me (still is I suppose) …. your Aberdeen Voice editor.

Which brings me to the purpose of this one off spontaneous and unusual Aberdeen Voice article.

In the last few hours, I discovered a forgotten, presumed lost (or borrowed and not returned) cassette tape which was recorded by myself and Frunkie B from the mixing desk we were charged with the task of operating … or at least, preventing teuchters from plonking/spilling their beer, or stubbing their fags out on.

And so, 30 odd years later, I decided, if I had gone to sleep when I should have … like about an hour before I found that ‘lost’ tape … it might become ‘lost’ again ….. maybe forever!

And so, instead, I lashed a load of wires and boxes together, and now have a digital copy of the whole gig, which I hope to share soon.

However, I felt, when listening to one particular track, which was not part of the band’s set, but performed ‘off the cuff’ while some technical problem was resolved, that there was a wee bit of magic which transcended the background noise and the tape hiss.

Therefore, I felt compelled to ‘splice’ it out, and with the bare minimum of processing, offer it here without any further delay.