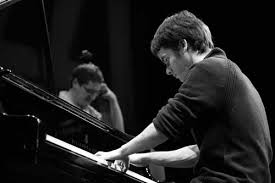 He became a star student at one of America’s most prestigious music schools but Alan Benzie, who returns to the Blue Lamp on Thursday, May 7, was in demand as a jazz pianist while he was still at school here in Scotland.

Now twenty-five, Benzie was a pupil at St Mary’s music school in Edinburgh, where he originally studied violin, when the owner of the Jazz Bar in the capital, Bill Kyle, used to phone him, sometimes at the last minute, to come over and play with some of the best musicians on the touring circuit.

“I remember once getting a call just after I’d gone to bed,” says Benzie.

“It was Bill, phoning to say that the pianist he’d booked hadn’t turned up and asking if I could deputise. So I got up, had a quick shower, got dressed, dashed over to Chambers Street, and played the gig.”

His experiences at the award-winning venue were not always quite so impromptu. As a teenager who had shown considerable promise, he had been asked to play the Saturday afternoon slot regularly and he would later go on to play residencies at the club with musicians including the Russian trumpeter Valery Ponomarev and American vibes player Joe Locke.

Once he arrived at Berklee, after winning the inaugural Young Scottish Jazz Musician of the Year competition in 2007, Benzie played with other notable musicians including saxophonists Jerry Bergonzi and Joshua Redman. He also won the college’s Jazz Performance Award in 2008, the Alex Ulanowski Award for outstanding composition in 2009 and 2010, and the Billboard Magazine Endowed Scholarship, which is given to the year’s outstanding student, in 2010.

Such achievements couldn’t have been further from Benzie’s mind when he began studying violin at St Mary’s. He enjoyed playing the instrument and sat in on the school’s monthly jazz classes but when he heard Swedish pianist Esbjörn Svensson, whose trio EST enjoyed huge worldwide popularity in the early 2000s, he decided he had to become a pianist.

Svensson, who died in a diving accident aged forty-four in 2008, became a mentor to Benzie as the pair had long conversations about music on EST’s frequent visits to Scotland.

Now Benzie is leading his own trio, featuring Edinburgh-born, London-based Andrew Robb (bass) and Hungarian drummer Marton Juhasz, and releases his first album, Traveller’s Tales, this month. It features music inspired by his own travels.

“I’ve been lucky enough to spend time in different places and this has had a big impact on the way I look at the world and how I write music. I also love a good yarn,” he says.

“All of the tunes on the album have a story behind them, some of longer ones being like diary entries and the shorter ones more like capturing an image.”

And although his travels have taken him to play at some of the world’s best known venues and festivals, he still has a soft spot for the Blue Lamp, where he last appeared two years ago.

“Speak to musicians in London and from places further afield and if they discover you’re from Scotland, they almost inevitably mention the Lampie, as everyone seems to know it,” he says.

“It’s a great room with a special atmosphere and I’m really looking forward to being back there.”