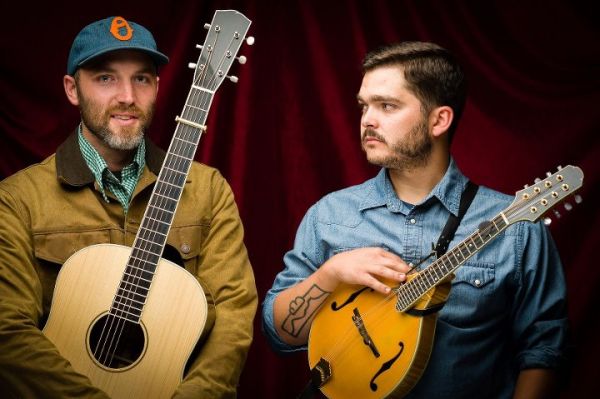 Cahalen Morrison & Eli West are to appear at the Blue Lamp, Wednesday 6th May.

With thanks to Martin Raitt.

Cahalen Morrison & Eli West are, simply put, two of the most innovative and subtle roots musicians around. Their music draws from old folk sources, but it sounds vibrantly alive.
Cahalen Morrison writes songs that sound like a Cormac McCarthy novel: simple, beautifully crafted, and seemingly formed from raw natural elements.

Eli West brings jagged, angular arrangements based in bluegrass and old-time, but refracted through a 21st century lens.

Like Ansel Adams’ photography, their music is instantly accessible and built from the simplest materials, but at the same time seems to transcend its base fundamentals. Together, Cahalen and Eli tap the root of the old country and bluegrass duets. As the sparse landscapes of Cahalen’s vocals reflect the warm glow of Eli’s voice, it’s clear that this duo was made to sing together.

See a review of their appearance at the Salmon Bothy, Portsoy, written by David Innes for Aberdeen Voice.