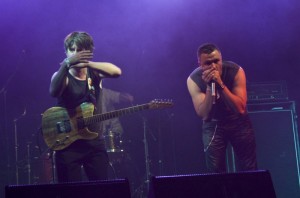 Gerry Jablonski and The Electric Band have long been one the most successful acts to come out of Aberdeen.

Their first 2 albums on Fat Hippy Records have sold to classic blues rock fans all over the world and both albums have had to be re-pressed to supply demand for their music!

On the 23rd September Fat Hippy will release their stunning third album Twist Of Fate.

Recorded whilst the band were fighting for their future as drummer Dave Innes (Midge Ure, Marillion, Fish, Bay City Rollers) battles with stomach cancer there is real passion and pain on this album and it takes the band and their electric music to a whole new level.

The band will play Aberdeen’s Lemon Tree on September 20th; other upcoming dates include 21st September at Non-Zeros, Dundee and 27th September in Edinburgh’s Voodoo Rooms.

With tours of Poland, Germany and Czech Republic already booked for 2013 and 2014 to launch the album and interest from the USA growing every day you should probably catch this band whilst you can!  More info:

3 Responses to “Twist Of Fate For Jablonski And Electric Band”