Duncan Harley reviews ‘Made In Dagenham – The Musical’ at His Majesty’s Theatre. 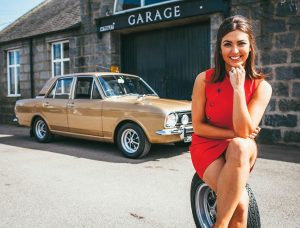 The timing couldn’t really be better. At a time when Labour is in disarray and the pay differential between males and females performing the same job remains at a whopping 18%, the Lyric Musical Society production of Made in Dagenham the Musical illustrates graphically that despite decades of industrial strife and equal pay legislation there is nothing fundamentally different in the labour market.

The glass ceiling is still firmly in place.

The Dagenham car plant in the London Borough of Barking nowadays employs around 3,000 people. Output today consists mainly of the production of car engines with around 1.4m each year making the long trip down to the end of the assembly line. Vehicle assembly ceased at the plant in 2002 and Ford estimate that 10,980,368 cars were produced at the 475 acre site during the period between 1931 and 2002.

A rough calculation reveals that, assuming that each automobile had a seating capacity of five and each vehicle had two front seats and a bench rear seat; the mainly female machinists working in the Dagenham plant seat-cover fabrication shop were kept pretty busy most of the time manufacturing the seat covers for around 32,941,104m Ford UK car seats. I could go on.

However, despite long held aspirations by the trade union movement to secure equal pay for both sexes many union members, to the delight of the employers, remained fearful of the threat to male employment posed by the female workforce and actually supported employment law discrimination directed against women and married women in particular.

Labour government, fearful of losing the certainty of the TUC Block Vote, continued to echo Beverage’s sentiment that the housewife belonged in the home and had no place in gainful employment.

In June 1968 things came to a head at the Ford plant when 187 women machinists employed in the seat cover machine shop took strike action and brought Ford to its knees.

There had been longstanding and largely unresolved grievances regarding health and safety issues at the plant.

The women worked in an old and draughty asbestos clad ex-aircraft hanger using unguarded machines. Workers were watched over by assessors and quotas of around 30 seat covers per hour were expected. Injuries were common and it was held that workers were not really proper machinists until they got caught by the machine.

To cap it all, the women employees were paid at an unskilled B grade rate which was only 87% of the unskilled male rate. The scene was set for double trouble at mill. 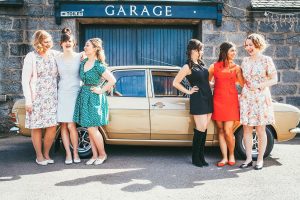 Based on the 2010 film of the same name, the Lyric Musical Society production of Made in Dagenham the Musical presents the story of the ensuing three week strike in an engagingly gritty and generally humorous style.

Ambitious in nature, the Dagenham stage set presents as slightly bewildering. However in a blistering series of fast paced scene changes the bricks and mortar factory walls certainly keep the plot moving on at a lively pace.

Alongside the various Ford factory sets, there are scenes set within the PM’s private office, in the Westminster offices of Barbara Castle and on Eastbourne beach. The family home of strike leader Rita O’Grady features regularly alongside a replica of the infamous Dagenham Berni Inn better known as the spawning ground of both the prawn cocktail and that Black Forest Gateau

Undoubted star of the show is Sophie Hamilton Pike as Rita the accidental activist. A regular at HMT and well accustomed to playing roles as diverse as the evil Inverurie Panto Queen and occasional Principal Boy, she leads the audience seamlessly through the troubled tale of Rita’s speedy journey towards political awareness.

Andrew Begg’s witty Mike Yarwood take off of PM Harold Wilson probably mystified many of the less elderly in the theatre audience. Who even remembers Ganex after all? What does Harold have against Belgium? Why is the PM portrayed skipping gaily across Eastbourne Beach in a Donald McGill seaside cartoon costume? Should the man have gone to Specsavers before vacating the closet? No doubt a memory-lane trip down to the Scilly Isles will reveal all.

Perhaps some of the innuendo laden banter is outdated and maybe even a little obscure but it usually gets a ribald laugh anyway. Musical numbers, and there are around twenty of them, range from Eddie and Rita’s sweet duet “I’m Sorry I Love You” through to “The Same Old Story” at the Berni Inn and the rousing TUC Conference climax “Stand Up”.

Entertaining in the extreme, Made in Dagenham the Musical plays at HMT Aberdeen until Saturday 27th August. Oh and be sure to watch out for the mysterious man in Act 2 playing his guitar atop a ladder.