Former Aberdeen FC stars, John Hewitt and Russell Anderson are backing the Friends of Murcar campaign which aims to secure a leading role for the North East club and its championship course in the Scottish golf scene. The campaign includes a competition to win round of golf with the Pittodrie legends. With thanks to Duncan Fisher. 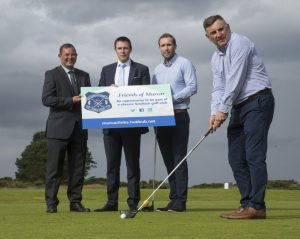 One of Scotland’s classic links golf clubs, Murcar Links, has adopted a fundraising approach with a difference after launching its Friends of Murcar crowdfunding campaign to drive the club forward while contributing towards young golfers in the region.

The Aberdeen-based club is looking to raise £250,000 to fund the first phase of a new irrigation system to further enhance its championship course and ensure it remains one of Scotland’s best for generations to come.

The continued development of Murcar as a venue is expected to have a positive effect on the wider golfing community.

In keeping with Murcar’s keen support for youth development, 10% of the final amount raised by the Friends of Murcar campaign will be donated to the Paul Lawrie Foundation which provides opportunities for juniors of any age and background to take part in golf.

Although common within the business world, crowdfunding campaigns are a relatively alien concept for sports clubs. Murcar is hoping the approach will cement its position as a progressive club at the heart of Scottish golf, where it supports the game’s development at all levels from local junior programmes through to full European Tour tournaments.

Launched by Aberdeen FC living legends, John Hewitt and Russell Anderson, at the club, the Friends of Murcar campaign offers numerous fundraising entry points and rewards and, as extra incentive for Dons fans, anyone donating a minimum £20 will be entered into a prize draw to win a fourball with a friend to play alongside the Pittodrie heroes.

“As a club, we are constantly looking at ways to innovate and improve on and off the course and, following years of supporting local, national and European golf as a venue and partner, we felt this was an ideal time to try something a little bit different to support the next stage of the development of Murcar Links.

“We are proud of the role we have always played in supporting the development of golf within the North East and we hope the Friends of Murcar campaign will enable us to take the courses to another level for the benefit of not only members, but the range of visitors, competitors and partners who use it on a regular basis.

“The grassroots of the game are so important to a club like ours so it was an easy decision to donate 10% of the money raised to the Paul Lawrie Foundation. It does a fantastic job introducing youngsters to the game who, ultimately, will be the lifeblood of golf in the future. Support of the Foundation sits very well with our decision to make junior golf free at Murcar in 2016.”

“I’ve been a member at Murcar for nearly 20 years and have seen the course develop over that time. At its best, it’s right up there with the top Scottish courses and if the club is able to raise the necessary funds, it will be fantastic for both members and the wider golfing community.”

Former League Cup-winning captain, Russell Anderson, said “The North East has great facilities across all sports and it is important those within the sporting community continue to offer opportunities for participation at all levels. Murcar Links is a fantastic golf club and the proposed works will help it continue supporting golf development in the region for many years to come.”

Full details of the Friends of Murcar campaign, including fundraising rewards and donations, can be found at murcarlinks.hubbub.net.

Founded in 1909, Murcar Links, sitting on the picturesque Aberdeenshire coast, is a stunning and classic test of Scottish links golf, popular with members and visitors alike.

A regular host of tournaments of all levels, including the 2015 European Tour’s Saltire Energy Paul Lawrie Match Play, the club has a particular commitment towards the development of youth and amateur golf, having held qualifying for the Senior Open Championship as well as the full European Boys Team Championship and European Challenge Tour’s Scottish Challenge in recent years.

The Paul Lawrie Foundation (PLF) was launched in 2001; two years after Paul famously won the 1999 Open at Carnoustie. It provides opportunities for juniors of any age to start playing golf, compete at golf and improve their capabilities to the highest level.

The mission of the Foundation is to get as many young people playing golf as possible but, ultimately, it would be great to see someone who started out or developed their golf with the Foundation winning on tour or even going on to win a Major championship.