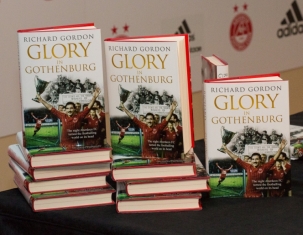 Baby, it’s cold outside, but thanks to Black & White Publishing, three Voice readers will shortly be settling down in comfy chairs with a glass of vintage port, carpet slippers singeing before an open fire, to read Richard Gordon’s Glory In Gothenburg.

We asked, ‘Everybody knows that the Dons’ goalscoring heroes that night were Eric Black and John Hewitt, but who scored most goals for the Dons in the whole tournament?’

As if any true Red needs reminding, the top European scorer that season was Andy Harrow.

Just kidding! It was, of course, Mark McGhee, bustling, intelligent line-leading striker of legend, the man who got in an ill-advised, bleezin’ scrap with Fergie in the boot room the day after the final. The man whose picture graces the cover of Glory In Gothenburg greeting the well-refreshed Red Navy as it disembarked from the St Clair, 48 hours after the wettest and most joyous evening of our lives.

So, who are the lucky fans whose names were randomly generated by Fred the Ed’s quincunx from a bulging virtual postbag?

Step into the spotlight:

Congratulations from all at Voice and Black & White Publishing. And probably from the author himself, he’s that kind of guy!

We’ve sent the winners’ names and addresses to the publisher, who assures us Richard’s terrific tome should be delivered shortly, possibly in time to read on the bus to Motherwell on Tuesday!

Thanks to all who entered.

Come on you Reds!